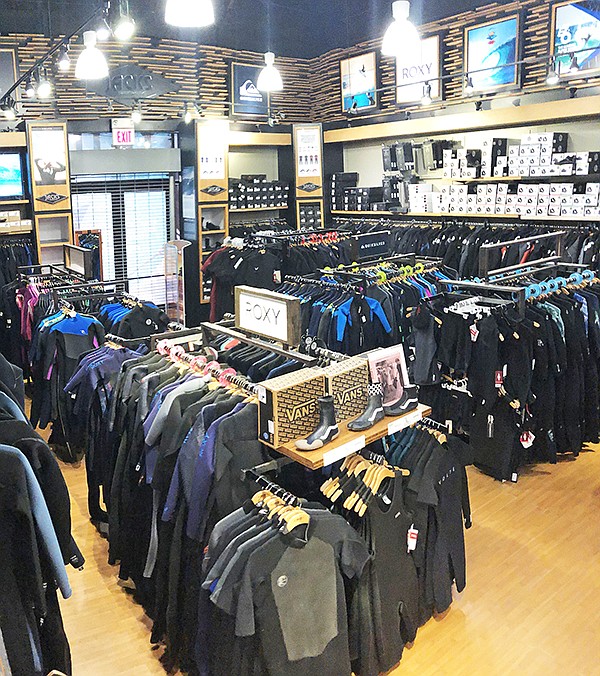 Jack’s Surfboards started business during the Eisenhower era all for the sake of a wetsuit. Founder Jack Hokanson wanted to buy a wetsuit in Huntington Beach, Calif., but couldn’t find any shops that sold the product in a city that was beginning to develop a reputation as a surfing mecca.

In 1957, Hokanson opened Jack’s as an emporium for surfboards, swimwear, T-shirts and wetsuits. The store is located across the street from the Huntington Beach Pier, which has been the site of the U.S. Open of Surfing, an event that bills itself as the largest surfing competition in the world.

Fast-forward 63 years and Jack’s has increased its commitment to wetsuits. In October, Jack’s more than doubled the size of the wetsuit section of its Huntington Beach flagship, said Bob Abdel, a Jack’s partner and buyer. Space was carved out from Jack’s longboard area in order to expand the wetsuit section from its former 1,200-square-foot space to its current 2,800 square feet.

The new wetsuit section features a wide range of brands such as O’Neill, Rip Curl, Quiksilver, Hurley, Vissla, Billabong, Volte and Xcel. Retail price points range from $150 to more than $400 for wetsuits for women, men and kids.

Jack’s selection of wetsuits includes rash guards and full wetsuits that can be seen on any surfing beach. Also available are fairly exotic items such as dry suits, which are designed for surfing or exploring underwater regions in freezing cold waters such as those around Iceland. These pieces can be purchased through special orders.

The past decade or so has been a golden age for wetsuit design. Wetsuits are increasingly being created as highly technical performance garments, made to withstand all types of surf. Abdel said it is crucial for people to shop for wetsuits at physical stores and try them on as “every manufacturer has a different fit,” he said.

Wetsuits are not as easy to buy online, unless the shopper is an experienced surfer and knows the exact features he or she is seeking in a wetsuit, said Patrik Schmidle, president of the market-research firm ActionWatch.

Wetsuits have enjoyed good growth since 2016. In 2018, wetsuit sales saw a 16 percent increase in a year-over-year comparison, but sales tumbled during the first half of 2019. During the first quarter of 2019, sales declined 7 percent, followed by 13 percent for the second quarter of the year, but sales rallied in the second half of the year. There was an uptick of 1 percent in the third quarter, which was followed by an increase of 8 percent in the fourth quarter as wetsuit sales shot up 14 percent in the month of November.

One reason Schmidle cited regarding the increase in wetsuit sales is that there are more casual surfers trying out the sport, which has provided a healthy boost within the category.