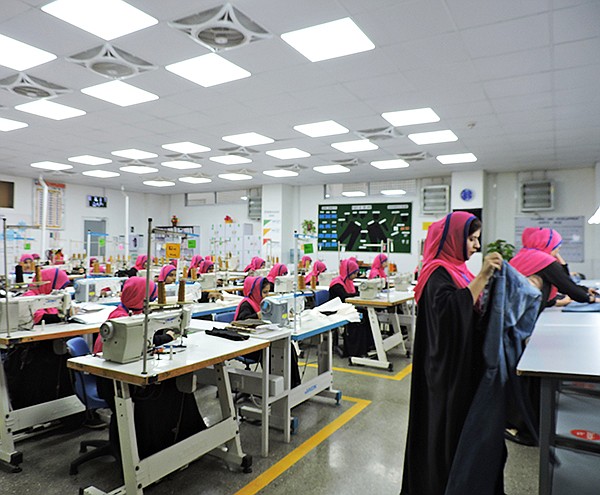 Artistic College of Training and Development

While trends in sustainable-apparel manufacturing have focused on traceability and sourcing to promote a circular economy, part of the cornerstone of Artistic Milliners’ formula has been promoting an environment that ensures the fair treatment of women.

“In 1966, we had a small factory with 22 women when my father was alive. He said, ‘If you treat them well, you will have thousands [of employees],” revealed company Chairman Yaqoob Ahmed, whose father and namesake founded the company in 1949. “My sister was involved in the business, and she would look after them as well. The feeling was not as employee and employer, it was more of a family.”

From those 22 women, the company has grown to employ a workforce of 18,000 employees. While there are now male and female workers comprising the company’s workforce, from entry-level trainees at the factory to decision-making executives, the commitment to maintaining an equitable environment within the company has evolved into a mission of elevating the status of women throughout the country.

After his sons, Murtaza and Omer, took a more active role in the company after graduating from universities in the United States, Yaqoob ensured they followed the same path toward maintaining a work culture that values employees. While this commitment has been part of Artistic Milliners’ fabric since its inception, there have been challenges.

In the past, when traveling on trips to visit potential partners, Omer—the company’s chief executive officer—had experienced the effects of prejudgments against Pakistan.

“Customers would ask about the country of origin, and I was apprehensive about saying ‘Pakistan’ because they would say that it was their corporate policy to not work with Pakistan,” he said. “That, for me, was frustrating at the time, but it motivated me to do better in terms of product.”

Focusing on establishing quality relationships with like-minded partners, Omer took a globalized approach to business. Working with brands whose values are aligned with Artistic Milliners, Omer would like to build upon the company’s commitment to creating a better garment industry.

“In the future it isn’t about brands, consumers or manufacturers, it’s about companies who share the same values and how they will end up working together. Consumers who can relate to those values will buy from those companies,” he said. “The business and corporations have become intertwined in terms of value structures. Don’t judge based on country of origin but on the value of the proposition.”

To reach sustainable goals, Artistic Milliners is using the United Nations’ 2030 Agenda for Sustainable Development as its guide, a roadmap that includes gender equality as one of its basic tenets. One of the methods of establishing an equitable professional path for women has been to invest in tools that will aid female workers.

Once women learn essential skills and gain an education, they are able to support their families, some becoming the primary breadwinners. A common theme among the women who work at Artistic Milliners in Karachi is the desire to be viewed as highly skilled workers who are valued due to their capabilities. For inspiration, many look to those who came before them.

“It was just me, but now I have five or six female workers in the department,” said Hina Khan, who is head of the supply chain. “They are in procurement, they talk with suppliers, they negotiate with them, they correspond with them. When they see women in a leadership position, it is a motivation for them.”

The company’s Little Milliners program allows parents to leave children with trusted care workers in an environment that is nurturing and educational. As a partner of Gap Inc., Artistic Milliners adheres to the San Francisco–headquartered company’s P.A.C.E. program, an initiative that affords women access to education, training and resources.

“We have the Artistic Milliners training and development, which is similar to an incubation center where women who have never learned to write in their lives are given job training,” explained Artistic Milliners’ Manager of Corporate Social Responsibility and Communication Faiza Jamil. “The training is free of cost, and they are paid their wages.”

In the physical testing area, where technicians examine the capabilities of Artistic Milliners’ fabrics, a lab assistant named Kanwal has worked for eight months. Connected through the Smile Again Foundation, Kanwal is healing and reclaiming her life.

“This gives me a chance to explore my hidden talent and learn new things,” she said.

The investment in offering paid training to women is paying off for the company. According to Artistic Milliners, the retention rate of the women they train is approximately 90 percent. Named the 2019 SDG Pioneer for gender equality and decent work by the United Nations Global Compact, Murtaza—who serves as the company’s executive director—is looking ahead to a future that includes women in the top roles within Artistic Milliners’ C suite.

“We have a diverse workforce, and I think there is a clear, direct, bottom-line correlation between having a diverse workforce and the results that you can have,” he said. “We are already including many initiatives to enhance the female workforce in our company. I don’t see why we can’t have a woman as a CEO one day. We already have 50 percent to 55 percent management led by women.”