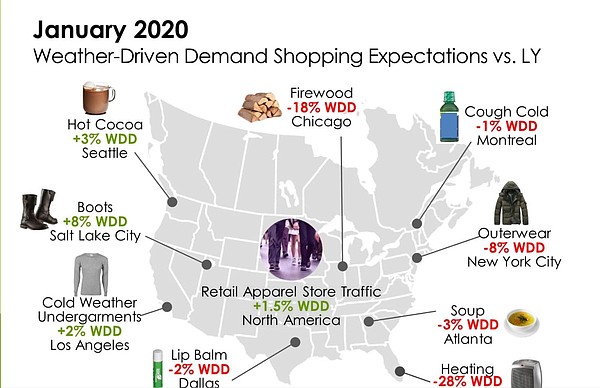 Macy’s Inc. announced results for its 2019 holiday performance on Jan. 8, and the results were a relative boost from its third-quarter sales, said Jeff Gennette, Macy’s chairman and chief executive officer.

Same-store sales for November and December, when holiday 2019 went into full gear, showed a slight decline of 0.6 percent. But it was a rally from the department-store giant’s third-quarter results, when same-store sales declined 3.5 percent, he said.

“Macy’s, Inc.’s performance during the holiday season reflected a strong trend improvement from the third quarter,” Gennette said. “Our digital business and Growth150 stores performed well. Additionally, customers responded to our gifting assortment and marketing strategy, particularly in the 10 days before Christmas.” Despite this news, on Jan. 8, Macy’s Inc. announced that it would close 28 of its store locations, one of which is in Antioch, Calif.

More results will be coming in. The National Retail Federation is scheduled to announce holiday 2019 sales results on Jan. 16. But early reports from the holiday season’s business were good. Mastercard SpendingPulse, a research division of the Mastercard payments network, reported Dec. 26 that holiday 2019 sales increased 3.4 percent in a year-over-year comparison.

Some holiday-business watchers described the recent season as enjoying mixed business. One forecast for holiday business was a miss, John Harman, a senior analyst for Coresight Research, said in a Jan. 9 conference call with reporters. His market-research group forecasted that sales would be 4.0 percent better than the 2018 holiday season, but Coresight tracking of holiday sales found that it only went up 3.8 percent.

Others have forecasted that holiday 2019 sales would be solid. In a Jan. 7 note, Ken Perkins of Retail Metrics reported a Wall Street consensus that the U.S. retail sector would enjoy a 2.1 percent same-store sales gain for the fourth quarter. But the season was not marked by perfect business. “Holiday 2019 was characterized by heavy promotions across the industry, particularly in specialty apparel and department stores, which are fighting for their very lives,” he wrote.

He also noted that digital-commerce sales skyrocketed during the holiday “Amazon looked to be king once again in terms of digital shopping,” Perkins wrote.

A Dec. 26 statement released by Amazon called its season’s business record breaking. Amazon declined to state how much revenue it made but did say that more people tried its Prime service during the holiday than in any previous year. During one week in the holiday season, 5 million people started free Prime trials and paid Prime memberships during the season.

But holiday e-commerce sales will be challenged with a high return rate, according to a study released Dec. 19 by CBRE, a commercial-real-estate and investment firm, and Optoro, a Washington D.C.–based platform that processes returns for retailers.