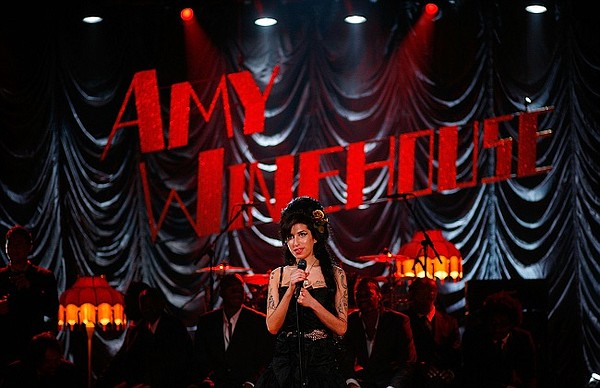 Opening today, Jan. 17, the Grammy Museum's new exhibition, "Beyond Black—The Style Of Amy Winehouse," pays tribute to the six-time Grammy winner and style icon. With a voice and musical sound that touched many, Winehouse's rock-'n'-roll approach to style took notes from vintage elements. Her 1960s-style hair and makeup, and sailor Jerry tattoos provided a foundation for the garments she wore, yielding an updated take on fashion from the past, while also honoring the era from which she took her musical inspiration.

"Amy always credited my mother, her grandmother Cynthia, as a major influence, both stylistically—as she taught her the importance of grooming and having a look—and musically," Mitch Winehouse, the singer's father, said in a statement. "She liked to call me a 'cab-driving Sinatra' and her mother's side of the family were also musicians. Amy not only brought her gift of music to the world, but also her fashion. We're eager for people to see her bold, beautiful spirit through all forms of her creativity and look forward to honoring her legacy by displaying these items at the Grammy Museum."

On display are fashions such as a dress that was custom made by Parry for Winehouse's canceled 2011 summer-festival tour, which the singer never had the opportunity to wear. There is also the yellow Preen Power Dress and red-leather, heart-shaped, velvet-lined Moschino purse from the 2007 Brit Awards, in addition to Winehouse's outfit from the 2008 Grammy Awards, designed by Dolce & Gabbana.

"Amy had a rebellious rock and roll style and attitude, which she made all her own with her signature beehive updo, winged eyeliner, tattoos, and bold red lipstick," Winehouse's stylist, Naomi Parry, said in a press release. "She had a clear vision of who she was and what she wanted the world to see. Working with Amy was one of my most satisfying and creative times in my career. I'm excited for the world to finally see the looks we created for what would have been her 2011 summer festival tour."

More-personal items that afford a glimpse into the singer's creative mindset include pieces such as a black cotton-twill varsity-style jacket, monogrammed in the front with the name "Amy," which features gray-leather sleeves. The jacket was one piece designed for a capsule collection designed by Amy Winehouse for Fred Perry's line. Another piece, Winehouse's mohair leopard-pattern cardigan by Dolce & Gabbana, was worn as the singer was photographed while she left London's Hawley Arms Pub.

"Amy Winehouse is undoubtedly one of the most gifted singers, songwriters and performers of the early 21st century," Michael Sticka, the Museum's President, said. "Amy's music and influence reached across genres and generations. It's an honor for the Grammy Museum to host her very first exhibit in the United States and celebrate her talents, creative process and musical legacy."

In addition to celebrating Winehouse by showcasing pieces that highlight her fashion style, details that provide glimpses into other areas of her life, such as handwritten lyrics and journal entries, home video, and her Grammy Awards, are on display. Some of these items have never been available for public viewing. Certain items included in the exhibition will be auctioned at Julien's Auctions in November 2021 to benefit the Amy Winehouse Foundation, which helps prevent drug-and-alcohol abuse among young people. "Beyond Black—The Style Of Amy Winehouse" will run until April 13