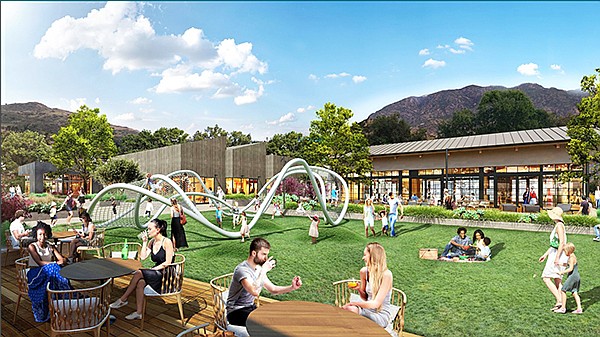 A rendering of La Paz Ranch

After A Decade, Malibu To Build a Retail Center

Malibu has been taking steps to give a final approval to start construction of Malibu La Paz Ranch, a new retail center, it will be one of the only new retail centers to be constructed in Malibu in more than a decade. This project is being developed in a market where only around two new malls have opened in the past 12 months in California.

The Malibu La Paz Ranch project recently passed a significant milestone in a long approval process. The City of Malibu’s planning commission approved revised plans for the project on Jan. 21, which has been called La Paz Ranch when undergoing the permitting process. With Jay Luchs, vice chairman of Newmark Knight Frank, managing leasing details, an anticipated date for Malibu La Paz to open is May 2022, according Bryan Gordon, chief executive officer of Pacific Equity Properties, Inc., which is developing the center.

The last boutique retail center constructed in Malibu was the Malibu Lumber Yard, a boutique-retail center that opened in 2009. Malibu Lumber Yard is a short walk away from Malibu La Paz Ranch, which is sandwiched between the Malibu Civic Center and Malibu Country Mart. The mart is an established retail center and the address of high-end boutiques such as John Varvatos, Double RL and Alice & Olivia. All of these developments are located in the city’s main government-and-retail hub in Malibu, which is located at the intersection of Pacific Coast Highway and Civic Center Way.

A retail center anchored by a Whole Foods grocery opened in June 2019. This center is located adjacent to the vacant lot where Malibu La Paz is scheduled to be constructed.

Malibu La Paz will feature 42,000-square-feet of office space and 70,000-square-feet of retail space. Malibu La Paz also will feature unique architecture, as well as green space to picnic, lounge and places where kids can play. “There’s no real meeting place in Malibu,” Gordon said. “We aim to create a place in Malibu where people can hang out. “When people hang out, shopping and dining will happen organically.” Gordon anticipates fashion retail playing a role at the center, which is intended to serve Malibu residents and people who work in the area.

Retail and offices will be housed in buildings that the developer says are inspired by “coastal rural village” architecture. Buildings will feature natural materials that blend with the surrounding area of mountains and ocean. Malibu La Paz Ranch will feature landscaping that includes plants native to Malibu and the Santa Monica Mountains. The eastern edge of the retail center will feature a multi-use trail for biking, hiking and horseback riding.

The project will offer 519 parking spaces, some of which will be located in an underground parking structure. Parking options will include valet and 33 electric-vehicle charging stations; there will also be space for bicycle storage.

Initially approved by the Malibu City Council in 2008, the Malibu La Paz Ranch project’s developers were required to complete a lengthy permitting process that included nearly every detail of the plans to be carefully vetted. At the recent planning commission meeting, developers submitted plans that improved pedestrian safety, polished guidelines for the Malibu La Paz garage and relocated the area’s retail closer to Civic Center Way. The planning commission also gave a green light for a restaurant to serve breakfast in the morning.

“In many coastal communities, it can take 10 or more years to complete if it has any scale to it,” he said. “Coastal communities like things the way they are. Many residents don’t want to see more. More is not always good for coastal communities. They’re justifiably worried about overdevelopment and as a result there’s a natural tension between developers and a city’s constituents.”

Describing negotiations between developers and residents looking to control development as a “full-contact sport,” Kosmont offered a few words of advice. “Bring your pads, your helmet and probably your lawyer,” he said.

In a market where a lot of commercial property has been developed, entrepreneurs seek to redevelop sites. Earlier this month it was announced that a former Sears building at the Westfield Topanga & The Village mall in Los Angeles’ Woodland Hills area would be redeveloped into a shopping and entertainment district. The mall’s parent company, Unibail-Rodamco-Westfield, will revamp the 160,000-square-foot Sears building for $250 million, according to media reports.

Mall guru Paco Underhill, an environmental psychologist, author of “Call of the Mall” and chief executive officer of the retail-development consulting firm Envirosell, Inc., said that in the past few years mall developers have been looking to bring nontraditional businesses into malls. These untapped opportunities include residences, schools, groceries and even places of worship.

“When you think of American shopping malls, the most important resource they have is the crumbling parking lot that surrounds the malls,” he said. “There are plenty of opportunities to develop something new in sprawling parking lots, perhaps a use that did not fit into a traditional mall.”