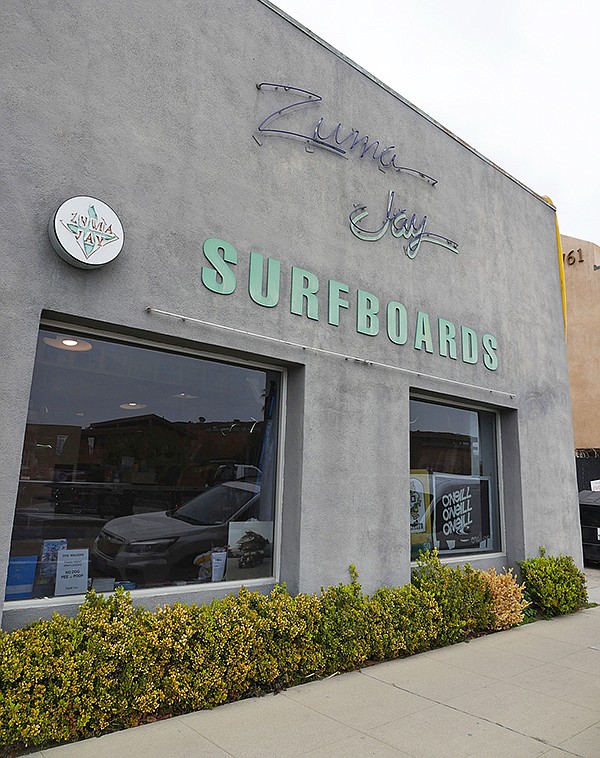 During a time when independent, multi-line stores are considered to be playing defense against digital retailers and mono-brand shops, Malibu, Calif., remains a haven for independent boutiques. For more than 30 years, the Malibu Country Mart and Malibu Village retail destinations have been at the center of this boutique scene, which included pioneering Los Angeles multi-label stores such as Fred Segal and Ron Herman. In 2009, the boutique-focused Malibu Lumber Yard retail center opened adjacent to the Mart and the Village.

Located across the street from the Pacific Ocean, notable for world-famous surf beaches, Malibu also is well known as an enclave for wealthy residents and A-list entertainment figures. It has long attracted local and global travelers, but retailing in the area also presents challenges.

Hundreds of Malibu residents lost homes during the devastating Woolsey Fire of November 2018. Many moved away, and the city’s retail suffered, said Fred Levine, co-founder of the M.Fredric boutique. But he also said that business has been recovering nicely, and the Malibu community has supported its shops even through tough times.

“They are loyal customers,” he said of the people of Malibu. “They love their community.” 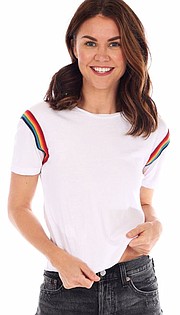 For the second time in its 12-year-history, the M.Fredric boutique at the Malibu Country Mart is being remodeled. The 4,200-square-foot space will get new tiles on its floor as well as new lighting and fixtures, said Fred Levine, co-founder of the casual-fashion retailer that is headquartered in Agoura Hills, Calif., which neighbors Malibu.

The Malibu customer is unique and seeks a specific look, Levine said. That customer is looking for casual sweats, high-end terrycloth and fashion. “It’s a different feeling at the beach. We have to look for a sweet spot in styles,” he said of balancing casual styles and fashion.

Popular styles at M.Fredric include faux-fur coats. Retail price points range from $100 to $200. One of the brands making these coats is Dylan, said Mikayla Giroux, an M.Fredric Malibu salesperson. “They are soft and reasonably priced,” she said. “They are cozy when it’s been really cold.”

A biker-style leather jacket produced by the Mauritius brand retails for $250. Customers like the soft feel of the leather and the price. Similar biker jackets for women are triple the cost of the Mauritius jacket, she said.

Every style in the Aviator Nation brand is selling well at M.Fredric. T-shirts start at $86, Giroux said. “It’s the Chanel of athleisure,” she said. “It’s expensive, but it’s super comfortable.”

Also popular are T-shirts bearing the logos of rock bands from the 1970s and ’80s. Original Retro Brand is one of the top-selling brands making this style, which retails for $48 and up. 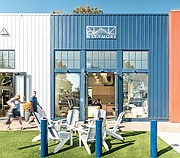 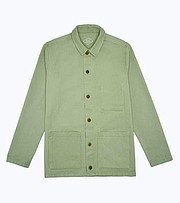 “I always wanted to do a Westside store, and this is far west!” said Witt, who grew up in the New York City area. The California dream brought him to Malibu. The sun-drenched, ocean-kissed scenery inspired him. A lively boutique scene also convinced him that the surf town would be a good place to take a risk on a new location. Wittmore’s neighbors include Fred Segal, Marine Layer, Catch Surf, Levi’s as well as independent boutiques The Alcove and Surfing Cowboys.

The 1,000-square-foot Wittmore Malibu has an airier feel than the urban Wittmore locations. Since it is located across the street from the Pacific Ocean, the shop’s ambiance takes inspiration from the beach.

The personality and the merchandise mix at Wittmore Malibu is still taking shape, Witt said, but apparel with a Malibu point of view has enjoyed popularity. The Hiro Clark brand designed a hoodie and a sweatshirt bearing the city’s name printed upside down. The hoodies retail for $154 while the sweatshirt retails for $144.

The Alex Crane brand is manufactured in Commerce, Calif., and it has been selling well at Wittmore. Some of the best-selling items include the button-down Playa shirt. The most popular color is the midnight blue/turquoise–colored Dusk shirt. It retails for $145. The mid-weight linen top is intended to be worn year-round, Witt said. The brand’s chore jacket, the Canvas Moss Kite, retails for $195 and has also been popular.

Another popular item at Wittmore Malibu has been the Relwen brand’s military-inspired chino pant. Different categories of the pant range in retail price from $198 to $220. “It fits everybody from a 30 waist to a 36 waist,” Witt said. 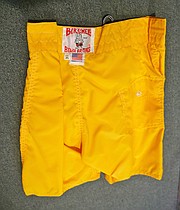 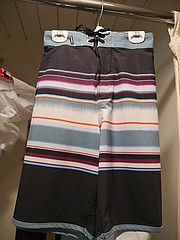 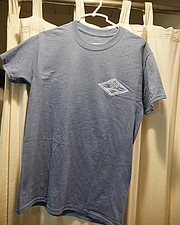 Zuma Jay is the second-oldest retail business in Malibu, said Jefferson Wagner, president of Zuma Jay Inc. and a two-time mayor of the city. The oldest Malibu retailer is Malibu Glass & Mirror, which sells glass windows and doors.

Wagner is a lifelong surfer who, in the 1960s and 1970s, ran with a legendary crowd of beach lovers, which included iconic surfer Miki Dora. In 1968, Wagner opened a surfboard-repair shop. In 1975, he opened a shop on Malibu’s Zuma beach, where he sold T-shirts and boardshorts along with surfboards. In 1979, he moved a few miles south to the shop’s current address. Neighbors include the exclusive Little Beach House, a private club owned by the Soho House members-only clubs.

“It’s funny that they have a dirtbag surf shop across the street,” he said of the club, which typically serves people who drive stylish, expensive cars. However, Zuma Jay has been popular with that club-going crowd as well as tourists and veteran Malibu surfers.

People are looking for unique shopping experiences. “I’m unique, and they are buying,” he said. With deep roots in the Malibu surf scene, people seek to be a part of it. Zuma Jay sold 13,000 T-shirts, beanies, caps, tank tops and other items bearing the shop’s name in 2019.

“T-shirts and wetsuits are keeping us afloat,” he said. Among the top-selling items at the shop is the Diamond T-shirt, which features a graphic of a diamond with the store’s name on it. Retail price points for T-shirts range from $10 to $17. The shirts come in 12 different colorways and are made on blanks from the Gildan label and soft garment-dyed blanks from the Comfort Colors label, headquartered in Paso Robles, Calif.

“The bestseller is a blue-jean blue,” Wagner said. “It’s an ash-colored blue that flies out of here. It’s not black or light gray. People are tired of a black shirt or white shirt. People are ready for a little flair.”

Other items that are selling well are the O’Neill Hyperfreak boardshorts, which retail for $50.

“It stretches well and dries well,” he said. “It feels nice under a wetsuit. It doesn’t get all scrunchy.” 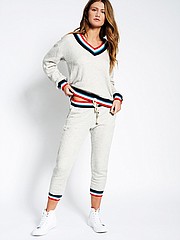 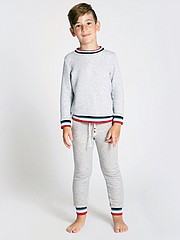 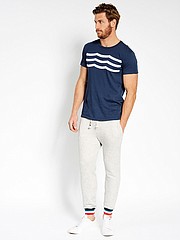 Malibu is the hometown of Fred Segal, the founder of the pioneering Fred Segal boutiques. He also ran a Fred Segal location in Malibu from 1975 to 1984. The store returned to Malibu in 2019 when it opened a 4,000-square-foot shop in the former location of the Malibu Cinemas in the Malibu Village retail center, said John Frierson, Fred Segal’s president.

“We’re going back to our roots with the store in Malibu Village, which continues to be a gathering place for the community,” Frierson said. “The Malibu location still has the shop-in-shop concept that Fred Segal pioneered where we offer a highly curated collection of menswear, womenswear, activewear and accessories but has a more playful, seaside style than what can be found at our flagship Sunset store.”

LeAnn Sauter, founder and CEO of Maris Collective, curates the merchandise mix at Fred Segal Malibu. She said that the Malibu location also focuses on the Fred Segal tradition of introducing new designers. “We try to give back to designers,” Sauter said. “We get brands that people are interested in learning about and we also revolve in new brands. There’s a lot of newness.”

Items selling well at the store include sweats from Hollywood, Calif.-headquartered clothing label Sol Angeles, which retails for $118. “It’s colorful. It’s comfortable and you can find styles for men’s, women’s and kids. You can shop for the whole family,” she said.

Also selling well, embroidered items from artist C.Bonz and her self-named line of vintage inspired styles, which ranges from jumpers to sweatsuits. Retail price points range from $85 to $795. Men’s basics from Hartel are selling well. Retail price points range from $65 to $220. They speak more to an urban interpretation of Malibu,” Sauter said. “It’s something with an edge, but not too far outside the box.”