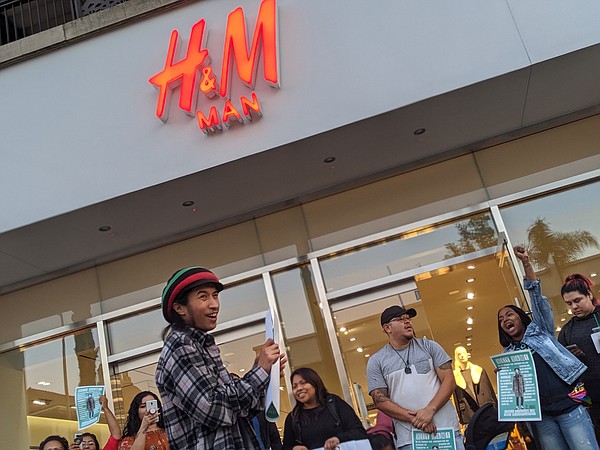 Nick Gallant during an October 2019 protest at a Pasadena, Calif., H&M Photo: United for Respect

H&M Must Rehire Worker Who Pressed for Store Improvements

A judge for the National Labor Relations Board ruled June 22 that retailer Hennes & Mauritz had violated labor laws when it fired a worker, Nick Gallant, from an H&M store in the San Francisco Bay Area town of Emeryville, Calif. Gallant had been petitioning H&M management to improve what he considered to be unfair and unsafe working conditions.

Ariel L. Sotolongo, an administrative law judge, ruled that H&M had to offer Gallant his job back and compensate him for any loss of earnings and other benefits that he suffered since he was fired on Aug. 27, 2019. H&M also is required to post a notice on workers’ rights to organize in its San Francisco and Emeryville locations, which have been closed due to the COVID-19 pandemic.

The case was brought before the NLRB by non-profit labor group United for Respect. After the decision, Gallant made a statement on his win.

“The NLRB sent a message loud and clear: corporations are not above the law and working people have the right to speak and fight for changes to policies that are unjust. All H&M employees need access to predictable, stable schedules and full-time hours if they want them and H&M should adopt a fair scheduling policy in all of their stores," Gallant said. "I will continue to stand up for working people at H&M and across the country because we proved that when we organize, we win!”

H&M did not respond to an email requesting comment by press time.

Gallant had made headlines last year when he participated in protests and rallies in front of H&M stores in Emeryville and Pasadena, Calif., in October 2019. Many people at the protests were United for Respect members and allies, according to media reports. The protests advocated for fair workweek rules, which seeks scheduling norms such as allowing reasonable time between work shifts for retail workers. Fair workweek rules are municipal law in cities such as San Francisco, Emeryville, Seattle and New York City.