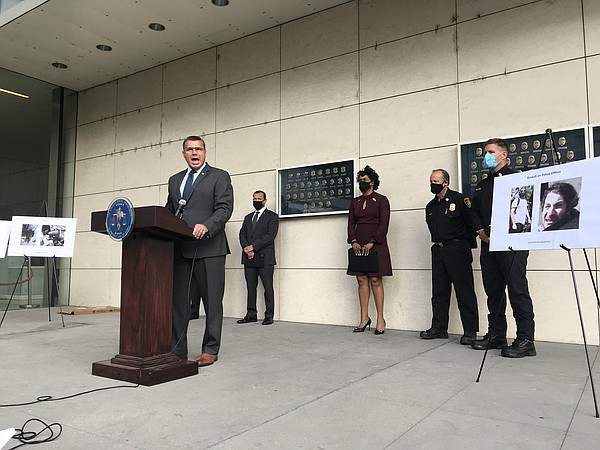 LAPD Continues Investigations of Looting and Other Crimes During Recent Unrest

Following the unrest that spread across downtown Los Angeles and high-end retail streets around other city neighborhoods at the end of May and early in June, the Los Angeles Police Department and its law enforcement partners on June 29 gave updates on investigations and prosecutions of crimes committed during the protests.

The LAPD, the Federal Bureau of Investigation and the Los Angeles Fire Department joined forces through a group called the SAFE LA Task Force. Formed June 2, the group is a response to the separatist groups that caused unrest while peaceful protestors sought to bring attention to police brutality.

Task-force representatives also asked for the public’s help in identifying individuals who committed acts of arson, attempted murder and looting. During a press conference at LAPD headquarters in downtown Los Angeles, a tips website was unveiled. It was requested that information should be registered at lapdonline.org/safelatips or by calling (213) 486-6840.

Kris Pitcher, an LAPD deputy chief, said that the task force was actively investigating 158 assaults on officers, 20 looting crimes and 10 arson crimes, which included the arson of the police substation at The Grove retail center. The LAPD has not released financial estimates of how much damage was caused during the protests.

Ben Fernandes, an LAPD lieutenant and manager of the SAFE LA Task Force, said that investigations were just beginning.

“We’ve been in triage mode for the past month, trying to find out who were victims of a crime—what businesses, what officers, what civilians,” he said. “Now we’re getting to the point where we triaged most of that and we’re pushing forward with identification and holding the folks accountable. That’s why we are asking the public’s help to identify these individuals.”

Voviette Morgan, special agent in charge of the criminal division for the FBI’s Los Angeles field office, said that there was a marked difference between peaceful protests and the crimes being investigated.

“The FBI respects and supports those who are exercising their First Amendment rights, including the right to peacefully protest,” she said. “Individuals should not have to have their constitutionally protected rights hijacked by individuals committing criminal activities. The FBI is committed to holding these perpetrators accountable.”