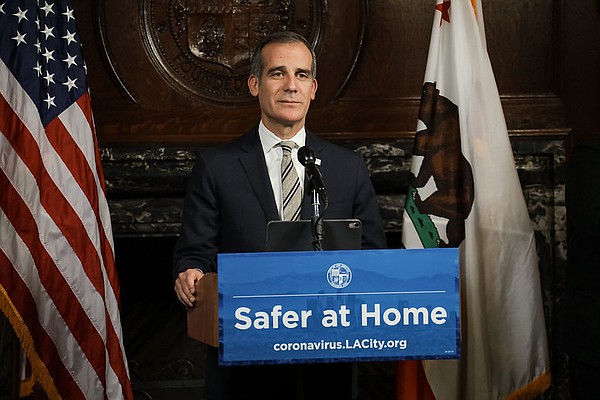 As the COVID-19 pandemic progresses, government and apparel manufacturers have started working together to compensate for a shortfall in personal protective equipment such as face masks and hospital gowns.

“Our manufacturing sector is unmatched anywhere, and the ingenuity of working people will help us get through this emergency,” he said. “L.A. Protects will save people and save jobs.”

L.A. Protects is working with sustainable brand Reformation and healthcare provider Kaiser Permanente to make 5 million non-medical masks for those who need protection such as grocery-store workers and non-medical staff in hospitals. Reformation will monitor mask production to maintain quality assurance. The City of Los Angeles will match approved manufacturers with industries in need of masks, Yael Aflalo, founder and chief executive officer of Reformation said.

When alarms were raised about the coronavirus in the United States earlier in March, independent fashion designers and brands volunteered to make personal protective equipment for the public, in addition to non-medical workers and first responders working around those infected with coronavirus. Other California manufacturers have rebooted their operations to make protective gear and have been working with governmental groups separate from city of Los Angeles.

American Giant, headquartered in San Francisco, repurposed its manufacturing facilities in North Carolina to make medical masks that have been certified by the U.S. Department of Health & Human Services, said Bayard Winthrop, the founder and president of American Giant.

Scott Wilson of Tour Image DBA Ustrive Manufacturing has been in contact with the California governor’s office as well as Los Angeles representatives of the mayor and San Diego County to make personal protective equipment.

He also has been working with Kaiser Permanente to make surgical masks for the healthcare provider. On March 26 , he received purchase orders to make surgical and non-surgical masks. He declined to state the terms of the deal that will last a minimum of four to six weeks. But he did say that his facility was responsible for making 250,000 masks daily. Kaiser executives helped his company get U.S. Food and Drug Administration approval to make surgical face masks.

“Kaiser Permanente did a fantastic job. They pulled this all off in one week. They responded to getting us set up and getting approvals from the FDA in light speed,” Wilson said.

Apparel business veteran Alex Berenson also got involved with a start-up that is working to tackle this crisis. On March 22, he was named to helm DMS Coalition, a Los Angeles-area company, that is working to organize manufacturers to work with government to produce, distribute and wholesale washable, reusable masks, isolation gowns, sanitizers, face shields and a number of other protective items. Berenson said that there is a silver lining to mobilizing factories to make protective gear.

“There’s a global shortage [of personal protective equipment],” he said. “We’re trying to be the domestic solution. We’re going to be hiring sewers now at factories repurposed to P.P.E. We’re putting people back to work, rather than having them sit at home.”

Berenson said that there had been talks with Los Angeles Apparel to work with DMS Coalition. Dov Charney of Los Angeles Apparel confirmed the talks. Charney said that his facility has devoted 500 sewing machines to making masks. He forecasts that his label will remain in the mask production business after this crisis is over. “We’ll always need masks,” he said.