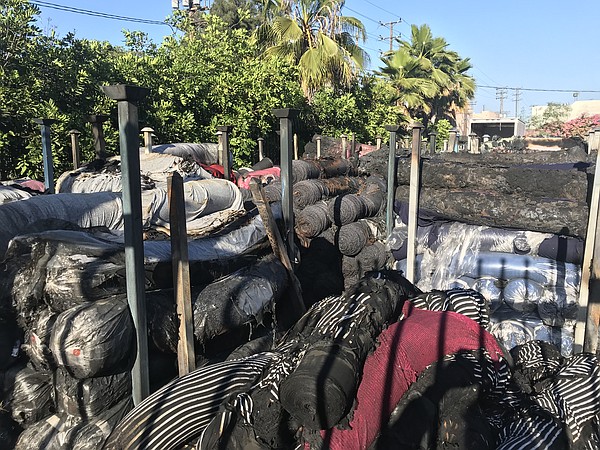 Piles of charred fabric sit outside of Lavitex following a fire at the wholesaler's building.

The Los Angeles Fire Department fought a fire at a downtown Los Angeles building owned by textile wholesaler Lavitex earlier this week. No injuries were reported for the blaze that broke out 3:51 a.m. Tuesday morning at 1914 S. Mateo St., according to a statement made by Brian Humphrey, an LAFD spokesperson.

After a fire alarm sounded, a fire crew drove to the single-story fabric building during the early morning on May 19. The crew forced its way into the building and found an area clouded by thick smoke coming from rows of rolled textiles, which were in flames.

Additional fire crews were called to battle the blaze. It took 90 minutes to extinguish the fire. The cause of the flames remains under investigation. The loss to the wholesaler is being tabulated, according to the fire department.

The Mateo Street fire was the second major blaze in downtown Los Angeles in the past week. On May 16, there was a fire a couple of miles away in a commercial building at 327 Boyd St., located near the Little Tokyo and Skid Row districts of downtown Los Angeles. A fireball from the blaze at a building, which housed Smoke Tokes, a wholesaler of ceramic pipes and vaporizers, injured 11 firefighters on Saturday.

Since then, seven were released from area hospitals for smoke inhalation and four remain hospitalized, according to a LAFD statement. The Boyd Street fire was extinguished within one hour and 42 minutes. Arson investigators and law enforcement will be investigating the cause of that blaze. There seems to be no connection between the Mateo Street and the Boyd Street fires.