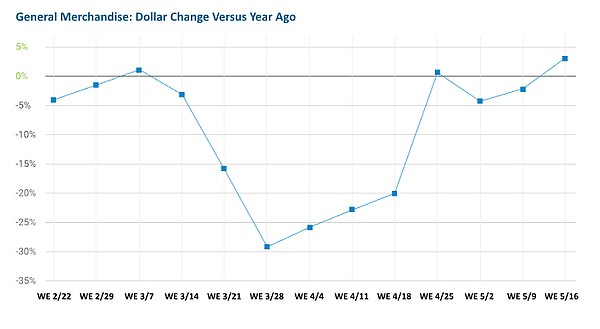 Purchasing summer clothing is creating some bright spots in the economic gloom caused by the COVID-19 pandemic, according to data released by The NPD Group on May 28.

The prominent market-research company found that summer seasonal-apparel categories such as shorts and swimwear recently accounted for 20 percent of total apparel sales. The NPD also found that by the end of the week of May 2, summer seasonal-apparel sales were still down compared to last year. But declines have been softening, said Maria Rugolo, an NPD apparel-industry analyst.

“Apparel was a low priority early in the COVID-19 crisis, when consumers were focused on things like groceries and other in-home necessities, but we’re seeing evidence that apparel is once again entering the spending-consideration set,” Rugolo said. “Warmer weather is spanning much of the country, allowing consumers to extend their mostly homebound routines to the outdoors and expanding their apparel needs beyond comfort and above-the-keyboard dressing.”

The study also found a steady rise in sales for basic apparel categories such as underwear and sleepwear. Basic apparel took a larger portion of the recent apparel market, capturing 25 percent of sales in the last week of April compared to 17 percent during the same time the previous year.

The NPD also found that total U.S. retail purchasing was flat in a comparison between the week ending May 16 and the previous week. According to the study, the pandemic has changed shopping behavior. Not surprisingly, e-commerce traffic has increased while in-store traffic has declined as many apparel retailers across the country are just starting to open up.

In a statement, Marshal Cohen, NPD’s chief industry adviser, said that consumer behavior remains in flux. “The consumer’s buying behavior has been consistently changing over the past several weeks, and with much uncertainty still looming it will continue to do so for the foreseeable future. As the consumer’s lifestyle goes through this transformation, retail needs to hone in on opportunities to address those changes in order to achieve sustainable long-term growth.”