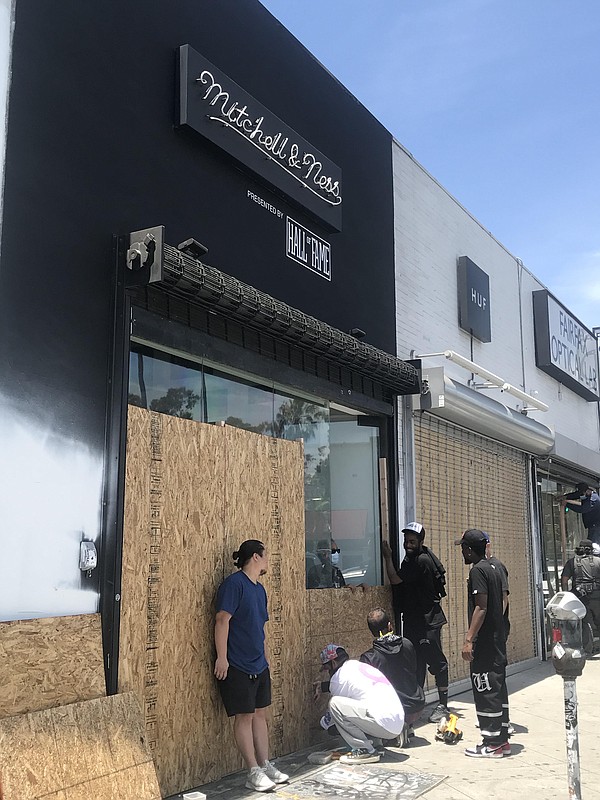 Measures are taken to protect Hall of Fame on Fairfax Avenue.

Los Angeles Retailers Clean Up As Looting and Vandalism Continue

Shopkeepers cleaned up vandalized stores May 31 after a weekend of rioting and looting on high-end retail streets in downtown Los Angeles, the city’s Fairfax District and Hollywood neighborhood and Rodeo Drive in Beverly Hills, Calif.

While shattered glass was swept up in some retail streets, rioting broke out in other areas. Sneaker and apparel shops such as Converse and Vans were vandalized and looted in the Third Street Promenade retail area in Santa Monica, Calif., on Sunday afternoon.

High-end boutiques and mass retailers in major California cities such as San Francisco, San Diego and San Jose, and cities across the United States were the victims of looting. The unrest has developed amid peaceful protests organized to bring attention to the May 25 death of George Floyd, an unarmed black man in Minneapolis, at the hands of police.

The timing of these riots could not be worse for retailers and property owners. Many of them were in the process of reopening stores after a two-month shutdown to slow the spread of COVID-19, said Ilse Metchek, the president of the Los Angeles-based California Fashion Association trade group. Until order is restored, retailers in the Los Angeles area will remain closed, she said.

“The city of Los Angeles does not have retail now,” she said. “They’re not going to open for fear that a mob would come through and loot.”

Many retailers suffered looting during 1992 riots in Los Angeles, Metchek said. But retail rallied and thrived again. She had no estimate of when retailers in areas hit by looters would reopen.

As shops across region were scheduled to open their doors after the COVID-19 shutdown, stores on Fairfax Avenue had been scheduled to reopen May 30, said Bobby Kim, who goes by Bobby Hundreds. He is co-owner of the prominent streetwear brand The Hundreds, which runs a flagship on Fairfax Avenue.

Rioting took place in front of his store on Saturday, Kim said, but the shop remained unscathed. He and neighboring store owners pushed back plans to open their shops, but he said that he hoped to open sooner rather than later.

“Everyone is hoping to reopen quickly,” he said. “I saw a lot of volunteers sweeping up broken glass and replacing windows,” he said of the day after the looting.

He also said that he was empathetic to the issues that have sparked protests.

“It was sad to see, “ he said of the unrest. “But I’m more sad to see the injustice of this country that continues than I am about losing money. The customers I sell to are the most important and their lives are at risk. They are my community. Windows can be replaced.”