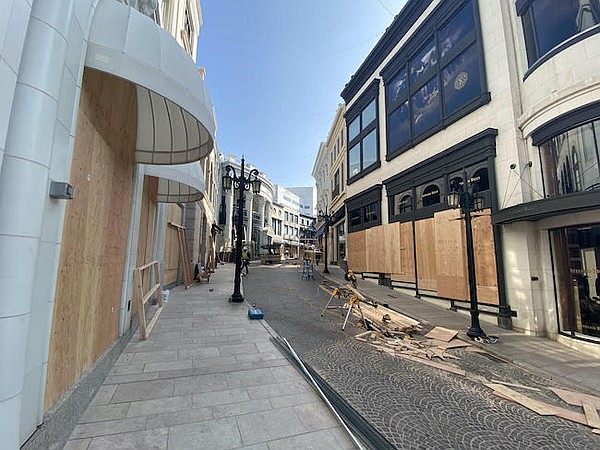 Retailers Board Up Shops to Guard Against Potential Riots

Shopowners across the region have followed guidelines and covered store windows in plywood, but for many it feels like a case of déjà vu.

Many of these business owners boarded up windows after rioting that followed the otherwise peaceful protests that were a response to the murder of George Floyd in May. Retailers in the downtown section of Los Angeles also had to install plywood boarding after riots following the championships for the Lakers and Dodgers sports teams in October. 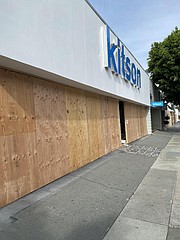 Fraser Ross, founder of the Los Angeles-based Kitson stores, said that he spent $3,000 on plywood to board up his stores this week. The threat of rioting came at a sensitive time for retailers. “We’re going into the busy holiday season. We got seven Saturdays until Christmas,” Ross said.

The Pol’ Atteu atelier in Beverly Hills, Calif., was looted in May, but the shop also has spent significant time being closed down due to the COVID-19 pandemic, said Patrik Simpson, co-owner and vice president of sales and marketing.

”It looks like a ghost town,” he said of Beverly Hills. He anticipated keeping the plywood boarding up on his store walls for at least a week. If an election winner is not announced by the end of the week of Nov. 3, there is a possibility that the protective plywood will have to kept up longer, Simpson said.

As the namesake and designer of his business, dealing with the year’s setbacks has made Pol' Atteu become creative with diversifying their business. In August, Atteu and Simpson introduced two affordable-luxury lines Ava by Pol’ Atteu and Pol’ Atteu Lifestyle, which has been sold at Walmart.com. They recently resumed production for their reality series "Gown and Out in Beverly Hills." They also continue to produce facial coverings and donate them to charities. They recently made face masks bearing the colors of the Armenian flag. In addition to these efforts, they have donated to Armenian charities during the current conflict over the Republic of Artsakh in the Caucasus Mountains.