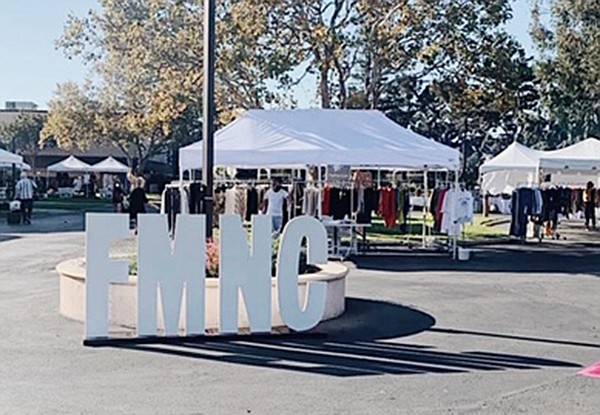 While many trade shows reacted to the COVID-19 rules against in-person gatherings by producing virtual shows, the regional Fashion Market Northern California took a different path. It reacted against COVID by producing its first open-air show, which ran Oct. 4–6 in San Mateo, Calif.

In a typical year, FMNC produces five shows annually at the San Mateo County Event Center. Rules against in-person events caused three of FMNC’s 2020 shows to be canceled. The October show was its final show of the year, and it was produced in an open-air space on the grounds of the event center, said Mary Taft, the show’s executive director.

“One of our exhibitors said that it was like a French open-air market,” Taft said of the collection of booths, which were covered by white canopies. “It was the first time we’ve done an outside show. It was a maiden voyage.”

Taft said that 95 exhibitors displayed goods from denim, dresses, activewear, accessories and footwear. More than 100 retailers shopped on the first day of the show, the great majority of whom were located in Northern California. Some came from Arizona and as far away as Minnesota. All were attracted to the notion of going to an in-person show, Taft said.

However, show producers, attendees and exhibitors had to respect COVID rules. All were required to wear masks. People’s temperatures were taken before they were permitted to enter the market area. Bathrooms were cleaned after every use. Booths were placed at a greater distance from each other than in past shows, Taft said.

COVID-19 wasn’t the only calamity that FMNC had to battle. The San Francisco Bay Area had been grappling with what has been described as its worst fire season in history during the past few months. During the market dates, the Glass Fire has been spreading through Napa County, located about 60 miles north of San Mateo. However, ash and smoke from the fire had not made the skies around San Mateo hazy, Taft and show exhibitors said.

Don Reichman, founder of the Reichman Associates sales agency, is a veteran exhibitor at FMNC and a former member of the show’s board of directors. He said that exhibiting at in-person shows was crucial. “My customers want to touch, feel and try on the garments and see for themselves if they are right for their boutiques,” he said. At the show, he was exhibiting lines including Alison Sheri, Brand Bazar, Damee and Karissa & Me. Wholesale price points for these lines range from $30 to $50.

However, the fires and COVID did affect the show’s business. “The orders were very small. They’re [retailers] not placing orders like they used to,” he said. A lot of stores were waiting until consumer demand rallies before posting robust orders.

Ginger Reynolds-Roe, founder of the Time Out Clothing boutique in Los Gatos, Calif., said that she wanted to be conservative with her funds. “I’m not buying too far ahead,” she said. But what she did buy fit in with the current culture where people are continuing to shelter in place. People are looking for clothes to lounge in. Women are buying presentable tops to wear for Zoom meetings. “I’m trying to interject some happy color,” she said of tops. “I saw a lot of that for Spring.”