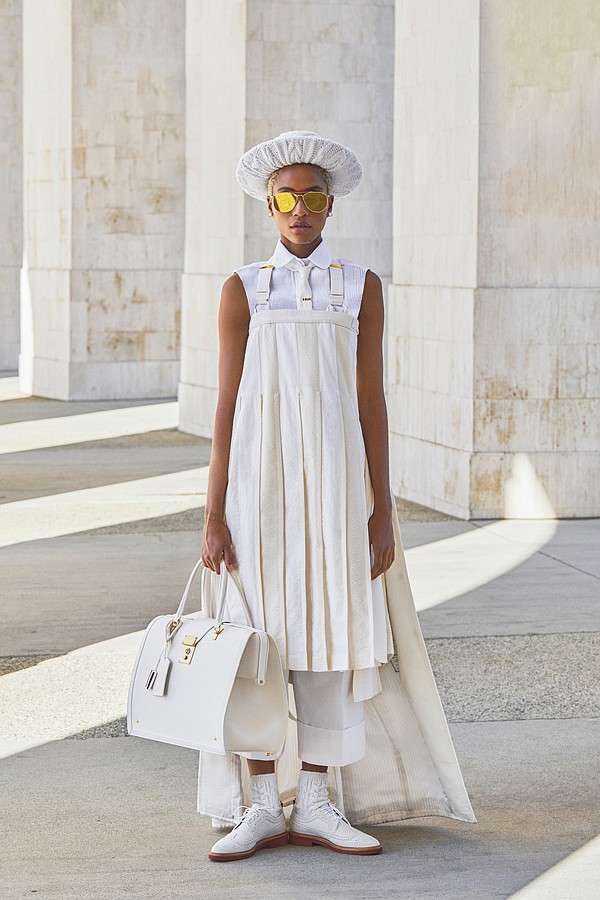 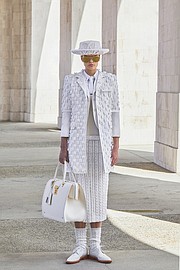 Playful, surreal runway shows are part of the Thom Browne brand as much as they are the shrunken silhouettes of the New York designer’s suiting. But the COVID-19 crisis forced Browne to change his fashion-show plans. In-person runway shows for the Spring 2021 Paris Fashion Week were canceled. Browne pivoted by producing a film to exhibit his women’s and men’s looks for the Spring ’21 season. He shot his fashion film at the Los Angeles Memorial Coliseum, where the 1932 and 1984 Summer Olympics took place. Browne incorporated a science-fiction edge into his film.

In the unnamed film, performer and filmmaker Jordan Firstman plays a sportscaster at the 2132 Intergalactic Olympic Games, which take place on the moon at a venue that is a re-creation of the Los Angeles Coliseum, where a crowd has gathered to witness the opening ceremony.

Models walk up and down the steps of the coliseum as Firstman announces the games’ opening ceremonies, with 37 looks on the models, who wore Browne’s Spring ’21 layered styles.

The season’s women’s looks include sack suits; long, structured blazers; and pencil skirts. For men, the season’s styles include oversized blazers, shorts, cropped trousers and pleated skirts. The styles were made using wool, cotton, cashmere, silk and satin, according to a statement from the Thom Browne label.

This collection seeks to embrace a unique style in the construction of suiting. The suits follow a couture inspiration and use an intarsia style of knitting in which a number of different colors are employed, according to the statement. “Jackets for men and women [are] sewn together like pieces of a puzzle using intarsia techniques that mix fabrics and fabrications. Each piece [was] hand sewn together.”

Other unique fabrications in the collection include women’s coats that use strips of wool seersucker that were ruched and sewn together with hand-stitched beading. The designer’s sketches also were hand embroidered into blazers, jackets and skirts.

Browne’s fashion film was released Oct. 4 and can be viewed on YouTube and at thombrowne.com