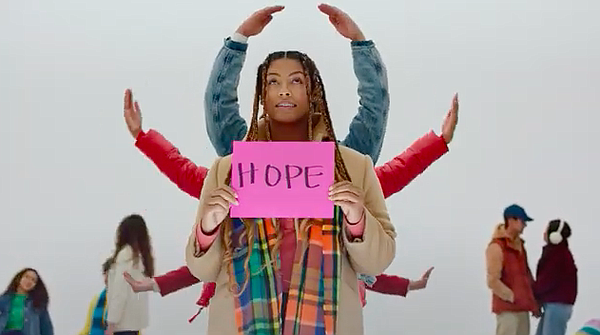 The holidays are approaching and specialty-retail giant Gap typically releases a holiday commercial that pundits call heartwarming. Despite 2020 being a crazy year, Gap seems to be on schedule with a sentimental holiday ad.

On Oct. 20, it unveiled its "Dream the Future" campaign. In the ad, people wearing Gap styles dance to the choreography of Ryan Heffington and hold signs bearing words, such as "Joy" and "Hope," expressing their wishes for the season. On the ad's soundtrack, vocalist Karen O sings a tune called "Dream Baby Dream."

The commercial was intended to foster a sense of unity, said Mary Alderete, global head of Gap Marketing.

“We must continue to look forward and promise to create a better future together. We’re optimistic that we can celebrate, not just our differences, but our common humanity,” Alderete said.

Directed by Christian Weber, the campaign ad will be released digitally and on national television.