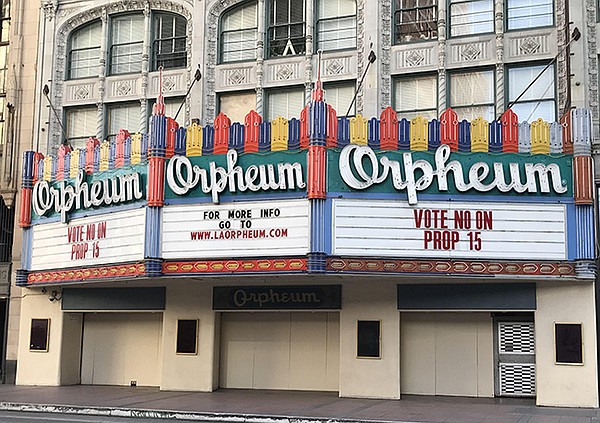 Prop. 15 will change the tax assessment of commercial and industrial properties. If it passes, it will bring in an estimated $6.5 billion–$11.5 billion in funding to local governments and schools that have been in a financial crunch for years, according to a description in the state’s official voter-information guide.

The voter guide also noted that the proposition will exempt residential properties, agricultural land, as well as owners of commercial and industrial properties with a combined value of $3 million or less.

However, Zuccaro said that if this law passes it would endanger small businesses trying to survive the tough economic fallout of the COVID-19 pandemic. She forecasted that landlords would increase rents to pay for their increased tax bills.

She leases 2,400 square feet of space at 7378 Beverly Blvd. in Los Angeles near The Grove retail center. Zuccaro declined to forecast how much her rent would increase if the proposition passes, but she said that even a 1 percent uptick would be painful.

“Prior to the COVID-19 pandemic, one in four California workers were employed in retail. If we are to see a robust economic recovery, these millions of jobs hang in the balance, and a tax increase of this magnitude will only hamper that and lead to more retailers permanently closing their doors,” Michelin said. “California’s unemployment is more than three points higher than the national average. We do not need more obstacles to restoring jobs,” she said.

People and groups supporting Prop. 15 include some public-employee unions and Facebook founder Mark Zuckerberg. California Gov. Gavin Newsom also has endorsed the proposition. In a statement emailed to supporters, he called the proposition overdue policy reform. “It’s consistent with California’s progressive fiscal values. It will exempt small businesses and residential property owners, it will fund essential services such as public schools and public safety, and, most importantly, it will be decided by a vote of the people,” Newsom wrote.

One of the last significant polls released on Prop. 15 found that the yes vote on the measure had a slight lead. The Public Policy Institute of California released a poll on Oct. 21 that found 49 percent of likely voters supported the measure while 45 percent opposed it and 6 percent were undecided.