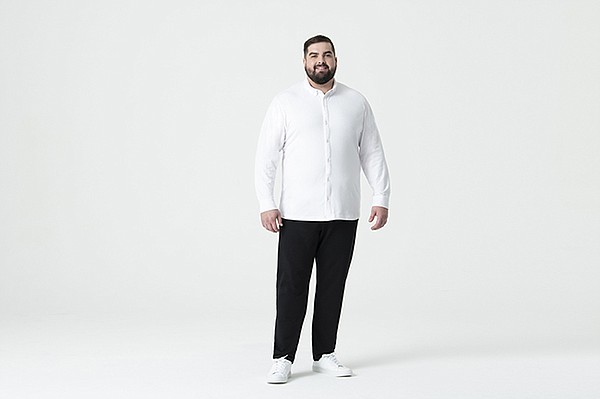 In the past few years, advocates of women’s plus-size fashions have demanded respect for their fashion category. Swet Tailor, a Los Angeles–based knits brand, has similarly demanded equal time for the men’s big-and-tall category.

Swet Tailor recently released its High & Mighty line, which co-owners Adam Bolden and David Kranz made for those wearing 3XL–5XL sizes and waists ranging from 40 to 56 inches. It is sold on the label’s direct-to-consumer site, swettailor.com. Bolden and Kranz are forecasting more support from a market that is underserved yet is considered to have high demand.

A 2019 study from market-research company The NPD Group noted that 11 percent of American men would fit into big-and-tall sizes. However, the group of specialty shops and fashion lines serving this market has always been small. Bolden and Kranz also contend that few big-and-tall labels try to offer anything stylish. They hope to serve a consumer niche that would eagerly support companies who take their fashion needs seriously.

For proof of a robust market looking for brands, the Swet Tailor owners point to the support they have gotten from some of the most sought-after denizens of the big-and-tall world—football players.

In 2019, they gave High & Mighty clothing to a stylist working for Nick Foles, a quarterback for the Chicago Bears National Football League team. News spread quickly in this exclusive group. Bolden and Kranz claim that 5 percent of their investor funding comes from NFL players including Mark Sanchez, a retired quarterback for the University of Southern California Trojans. He later played for the Bears, Dallas Cowboys, Denver Broncos and Philadelphia Eagles.

Working with athletes was a natural step for Swet Tailor, Bolden and Kranz said. The line was introduced in 2015 when the brand’s co-owners noted a spike in popularity for athleisure clothing. They hoped to develop styles that offered the feel of sweatpants and hoodies but looked like contemporary clothes, Kranz said.

“We know that guys are not the most fashion forward,” he said. “So we went after wardrobe basics.”

They got to work on what would later become the focus of the Swet Tailor line—its All-In pants, intended to have the silhouette and look of a traditional five-pocket jean. The cotton/spandex-blend fabric used to make the All-In pants made it feel like a sweatpant. Swet Tailor later tried a similar design for its Mindful shirt, which uses a cotton/rayon blend. It has the exterior look of a woven shirt but the interior feel of a knit garment. Kranz and Bolden hoped that their garments would fit into a brand credo. “There are three pillars to the brand,” Kranz said. “Comfort, style and quality.”

They later exhibited the brand at fashion trade shows such as Project and placed it in prominent men’s shops such as Mario’s in Seattle and the Fred Segal shop in Malibu, Calif. The Swet Tailor brand reported that its emphasis on comfortable clothes has served it well during the COVID-19 pandemic when people have mostly stayed at home.

For its September e-commerce business, the brand has estimated that its sales increased 60 percent in a year-over-year comparison with September 2019. The brand also noted that its wholesale business increased 25 percent in July. It is estimated that 20 percent of Swet Tailor’s online sales come from its new High & Mighty line. Following the line’s introduction, the entrepreneurs hope that strong brand loyalty kicks in and provides a platform for the company to grow.

They also hope that their fashion venture might serve as a source of self-esteem and dignity for the men wearing the brand. It’s the reason why they called the brand High & Mighty. “There’s a problem that big-and-tall has,” Bolden said. “There’s a negative connotation. We wanted to give it a positive connotation.”