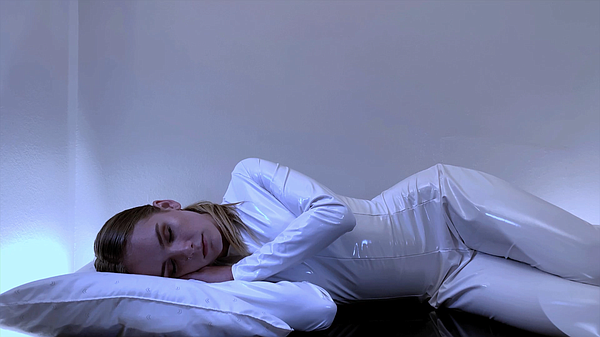 In the latest trailer for its "Synthetic Souls" project, HJFilmworld released "Comply," a journey into the internal challenges felt by a seemingly perfect cybernetic organism dressed in pure-white costuming. This need to comply through artificial intelligence, yet desire to explore feelings is a conflict that filmmakers Hasan Ali and Jeremy Baker wanted to capture in this installment with actor Natalie Knight portraying the machine that is developing sentient aspects of its consciousness.

"Advancing our collaboration with video showed the mental struggle of sentient life as it was evolving to feel more human and trying to mentally resist the programming in her brain was a cool idea we wanted to exhibit," Ali said. "My idea was to give the video a cerebral and somewhat abstract approach. The choice of costume was to show a clean aesthetic even though you can clearly see and feel something is off and in a slightly menacing tone."

Additionally, Ali mentioned that the costume design paid homage to the George Lucas film "THX 1138," which he cites as a "masterpiece and sci-fi cult classic." A stunning white PVC material from which the costume is made allowed the character to remain connected to her machine origins, while the clean, pure hue shows a clean, approachable covering that hides the inner turmoil.

"The entire point of the chosen style was to have that very clean and cerebral feel," Ali said. "There’s a certain effect that a clean aesthetic has on the brain especially when knowing what you’re seeing is visceral and dark in tone. The outfit provided a great contrast between Natalie and the surrounding visuals."

The decision to use PVC was also a practical choice for the HJFilmworld team, as they wanted to ensure the piece would withstand their filming schedule. Working with Artifice Clothing, a Toronto-based outfitter that specializes in handmade PVC designs, Baker was pleased with the finished piece that would bring the team's vision to the screen.

"The outfit worn by Natalie is made out of PVC. PVC, like silicon, has a shiny surface that reflects light really well. Considering its made out of plastic, it's very easy to clean and Hasan could direct Natalie as he felt without any worry about the costume altering shape," Baker said. "Considering there's many fabricators in the field of costuming, we wanted something that looked deliberate and took the style of wear seriously."

While Ali and Baker have dedicated their work to producing a film that touches on serious topics, including human reliance on machines and its impact, they love their work, still having fun while creating.

"Jeremy and I always take on the challenge of pulling off the visual style of what we are trying to create," Ali said. "We love going the distance within executing costuming. It's like being a kid again playing with your action figures. The world of sci-fi lets you fully indulge your imagination!"