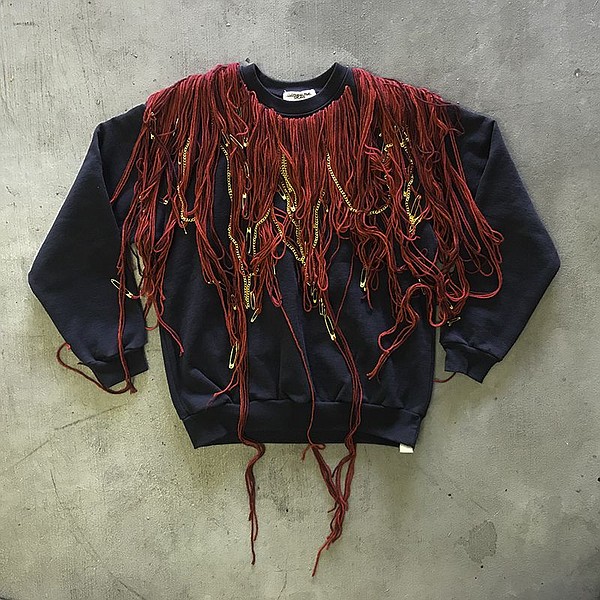 Andrew Hanson hopes to go beyond labels with Clothing That Speaks, his Los Angeles–based emerging fashion line that made its official debut in January.

“This is not streetwear, punk or hip-hop,” Hanson said. “It’s not disposable. This is Clothing That Speaks.”

Hanson takes T-shirt and hoodie blanks produced by Los Angeles Apparel and places mixed-media art on them. The media might consist of patches, heat transfers, muslin cloth, or spray-painted prints. Hanson makes one-of-a-kind pieces as well as limited runs of styles with enigmatic designs and images. Some of the images flex streetwear’s inclination for parody. One T-shirt is called PagliaccYE, referencing “Pagliacci,” the classic opera about a clown. The shirt’s image features the face of controversial musician Kanye West made up to look like a clown.

Retail price points range from $80 for a T-shirt to $350 for a hoodie. Hanson sells them on his website, clothingthatspeaks.com, and through a handful of boutiques in Japan.

Clothing That Speaks is a second chapter in fashion for Hanson, who started working in fashion around 2003. He displayed his brand, then called Andrew Hanson’s F, at trade shows catering to new designers such as the Pooltradeshow. He found success placing some styles at Hot Topic and doing commissions for musicians including Dhani Harrison, the son of Beatle George Harrison, Josh Homme of the rock band Queens of the Stone Age, country star Keith Urban and Karen O of the Yeah Yeah Yeahs.

Like many other independent designers, the Great Recession of 2008 wiped out Hanson’s business. He changed careers, earned a cosmetology license and worked as a hair stylist. But fashion design never lost its allure.

“I missed making things,” Hanson said. “I missed working with a team of people. I wanted to come in and create good stuff.”