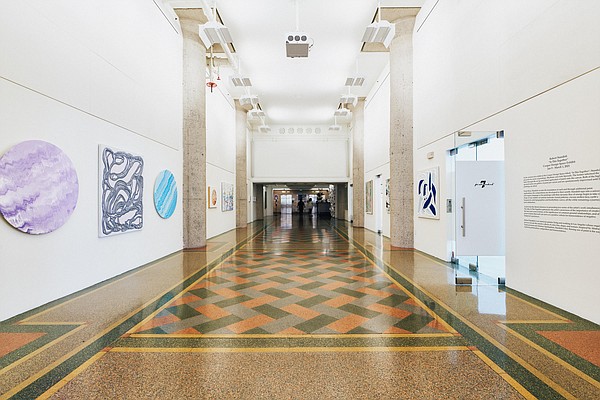 The Cooper Design Space showroom building (lobby shown above), located in the downtown Los Angeles fashion district, will undergo changes as new branding and service offerings are implemented next month.

The Cooper Design Space sits on the northeast corner of Los Angeles and Ninth streets in the Los Angeles fashion district.

In a fast-changing downtown Los Angeles, the Cooper Design Space showroom building will maintain its focus on fashion, said the building’s management; however, the owners will be unveiling changes before May, such as a new name for the Cooper and its sibling buildings—The Hirsh Collective—as well as new websites, logos and social-media outreach.

Part of the company’s new direction will emphasize a growing momentum and shared mission among the Cooper and its sibling buildings, said Robert Warren, the president of Investors’ Property Services, which has managed the properties since 2019. Since then, the company’s namesake family, the Hirshes, have stepped away from the day-to-day management of the buildings but will continue to direct the strategy and mission of the company.

Warren also noted that The Hirsh Collective buildings hope to maintain a point of difference focusing on personal service. “We’re excited that our buildings are going to remain family-owned, family-centered and in an excellent competitive position going forward,” Warren said.

Hirsh tenants, for example, will not have to deal with layers of bureaucracy when they deal with building management, Warren stressed. “You can get to a decision-maker in a phone call,” he said.

The Hirsh-family buildings have a long history in the fashion district. They were all constructed 90 to 100 years ago. Stanley Hirsh, a clothing manufacturer and entrepreneur, acquired a handful of the buildings in the early 1970s. He passed in 2003, and the City of Los Angeles honored his memory in 2016 by officially naming the intersection around Ninth and Los Angeles streets as Stanley Hirsh Square.

When Hirsh acquired the Cooper, it was a building devoted to manufacturing. Almost 20 years ago, the company started developing an emphasis on fashion showrooms, and, currently, the building’s tenants remain mostly fashion showrooms.

Owners also unveiled new names for some of their other properties. There’s the Trade Lofts, a two-building compound made up of the 719 S. Los Angeles Merchant’s Building and the 122 E. Seventh Mercantile Building. The Stanley Building now serves as the new name for the 656 S. Los Angeles Terminal Building. Another member of the collective is the Bendix Building, located at 1206 S. Maple St., which was turned into a space for artists studios a few years ago.

Warren hopes that the different Hirsh buildings will develop their own sense of place and community as well as forge relationships with their sibling buildings. He and his colleagues forecasted that Hirsh tenants would grow with the company and lease space in different buildings as their needs change.

As pandemic restrictions eased, retail buyers returned to showrooms at fashion-district buildings including the California Market Center, The New Mart, the Gerry Building and the Lady Liberty Building. Warren said that buyer attendance numbers for the March Los Angeles Market Week were good. He also believes that the office-space market will rebound after a year of people working at home.

“Argument one says office space is not going to return; people are going to work from home,” he said. “Argument two says that people can’t wait to get back to the office; they’ve had enough of working from home. Which way does it play out? I think we’re going to see people coming back to the office because they miss the cultural vibe. Buyers want to touch, feel and see fabrics in person.”

Part of the job of The Hirsh Collective staff is to develop features that will make people want to work in a showroom building. Margot Garcia is Investors’ Property Services’ general manager and a career Hirsh employee who started working for the family 19 years ago. She said that the company would develop the Cooper’s 11th-floor events space as an area for market weeks, photo shoots, filming as well as other trade shows.

The Brand Assembly trade show is scheduled to be produced at the 11th-floor events space in October, Garcia said. The Cooper also will continue to focus on offering space for emerging brands in the building’s incubator and temporary areas. The company will be introducing services such as electronic package delivery to tenants, who can pick up those packages in secure, personal lockers at any time of the day.