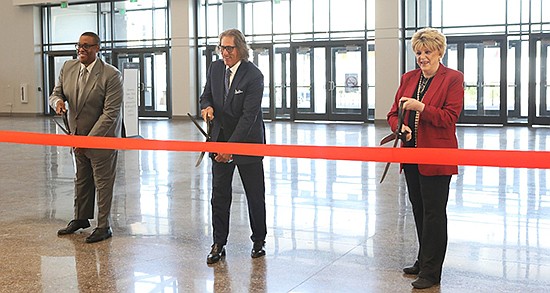 In time for the return of on-site trade shows in 2021, International Market Centers hosted a ribbon-cutting ceremony on April 9 for its new Expo at World Market Center Las Vegas in the city’s downtown area. The $103.5 million project by IMC’s parent company, Blackstone, was completed over three years.

“The Expo at WMCLV Las Vegas will be a hub for resurgence, addressing demand for modern convention and trade-show space in downtown Las Vegas,” IMC Chief Executive Officer Bob Maricich said in a statement. “With its state-of-the-art amenities, the Expo not only will attract additional business to downtown Las Vegas but also drive associated job creation for its residents.”

Split into North and South halls, the center was built to accommodate 1,000 trade-show booths and was designed by Ed Vance & Associates Architects, with construction performed by the Penta Building Group. The space’s first event was the IMC Las Vegas Market, which ran April 11–15. More than 200 temporary gift and home exhibitors will be featured. In August, the site will be home to the new IMC-produced Las Vegas Apparel event.

“It’s so exciting to be a part of such a beautiful facility that’s so vitally needed in this corridor,” said Cedric Crear, city councilman and representative of Ward 5. “This new exposition facility is truly a spark for downtown and will bring new people who have not been to downtown Las Vegas to experience our restaurants, hotels, nightlife and our main street.”

Economic-modeling predictions forecasted that the Expo at WMCLV will generate event-attendee traffic that could result in the purchase of more than 388,000 hotel-room nights per year, with 161,000 located within the downtown neighborhood. During last month’s 24th annual Spotlight Awards ceremony for the Southern Nevada Chapter of the Commercial Real Estate Development Association, the Expo at WMCLV was recognized as the standout for the organization’s Special Use Over 100,000 SF Project.