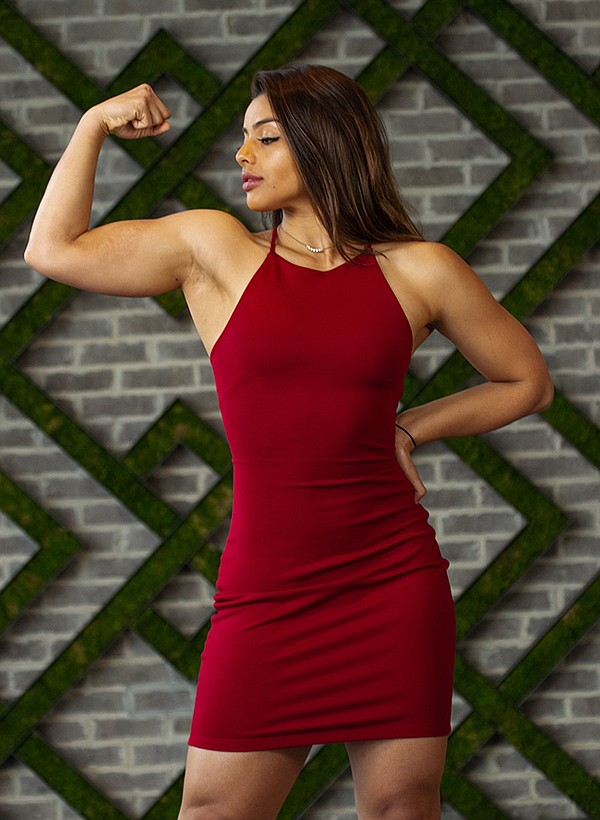 The Asesina Designs backless dress is designed to celebrate the broad shoulders and muscular backs of sportswomen.

However, fashion has not gone far enough to serve the athletic woman, said entrepreneur Alicia Mock. While Mock was raised in California, she now lives in Georgia but never forgot her roots. In Los Angeles, she manufactures Asesina Designs, a clothing brand created to fulfill the fashion needs of sportswomen whose bodies are defined by curves and muscles.

In Spanish, asesina means “female assassin.” Mock’s brand is intended to give women athletes the confidence and the sleekness of a sports champion, she said.

“When playing sports, women athletes are praised for being athletic and powerful, but when it comes to fashion or expressing their femininity society doesn’t accept them,” Mock said. “Society tends to categorize muscular female athletes as bulky and not the ideal body type for a woman. We can change that image with more athletes in fashion and supporting people with more-diverse body types. That would not only help adults but also the younger generation growing up.”

Mock said that she is not trying to create a new look or style. Rather, she’s aiming to help athletic women build their wardrobes with fashionable pieces. It was one of her main fashion issues growing up as a teenager who competed in gymnastics. As an adult, she trains as an Olympic weightlifter five times a week. Throughout most of her life, she had a hard time finding clothes that fit when shopping in mainstream fashion stores. 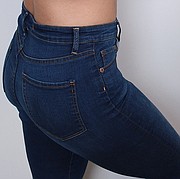 The skinny jean offers more room in the thigh and a narrower cut in the waist.

“I couldn’t find a single pair of jeans that fit,” Mock said. She had to find jeans that were a baggier fit or take the additional step of having her denim altered to suit her athletic build. Due to these challenges, Mock and a lot of her friends ended up dressing entirely in leggings and athleticwear.

When she was not training or studying for her business classes at Loyola Marymount University in Los Angeles, Mock made sketches of clothing. She contacted designers to help her develop her ideas and give her technical advice. In addition, she performed proprietary research by developing sizing data on a wide range of women athletes during 2019 and 2020.

Mock started the brand in fall 2020, when the label released a backless dress as well as T-shirts and hoodies. The T-shirts bear slogans such as “Supporting the Grind, Showcasing the Results.” The hoodie features the slogan “End the Negativity of Being Bulky.” The clothing is sold on her brand’s direct-to-consumer channel, www.asesinadesigns.com.

On May 2, Asesina will release its first jeans made for the athletic woman, Mock said. The first silhouette will be a high-waisted skinny jean with a dark indigo wash.

Retail price points range from $25 for a T-shirt to $75 for a dress and $120 for a pair of jeans. In May, the self-funded Asesina also will produce a crowdfunding campaign on its website to raise funds for the first production run of the jeans. In addition, Mock plans to produce Los Angeles pop-up shops later this year.

The brand’s major point of difference is fit. Jeans will give more room in the thigh area as well as a narrower cut in the waist. Tops will offer more room for broad shoulders and muscular backs.

The will to continue the venture remained strong as Mock developed her career as a business consultant. She also plans to introduce the line at bodybuilding events in the Southeast including the 2021 NPC Charlotte Cup and the Atlanta All States Invitational Championships.

Don’t expect her to make clothes for the gym as it’s a crowded market, according to Mock. When she surveys potential customers, they always discuss styles that they do not feel are available for the shapes of their bodies. “They want the same items that they see at the mall but specifically sized for their body types,” Mock said.