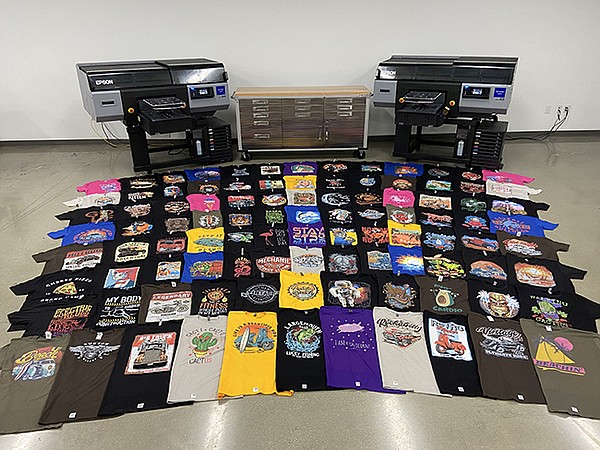 A display features 100 T-shirts made by two F3070 printers in one hour.

Epson Pushes Ahead in Printer Innovation With New Releases

At Epson America, Inc., the first half of 2021 has seen the release of new printers that will serve the needs of an evolving apparel industry. Earlier this year, the company unveiled its SureColor F3070, an industrial direct-to-garment printer and, on April 13, it released its industrial-level SureColor F10070H 76-inch-wide dye-sublimation machine.

This most-recent release from Epson meets the challenges of quick turnaround and customization demands. Within the SureColor F10070H, Epson incorporated six 4.7-inch PrecisionCore printheads that afford roll-to-roll processes up to 2,635 square feet per hour. Using UltraChrome DS6 ink to improve color saturation and contrast, the machine relies on CMYK with either light cyan and light magenta or fluorescent pink and yellow.

Shipping from Epson beginning in July, the SureColor F10070H boasts features that support just-in-time production. With its capacity of 20 liters of ink per color, with improvements on automatic paper-tension control and a fabric wiper, the machine reduces the need for an operator to monitor production, particularly due to its Epson Cloud Solution Port, which affords real-time monitoring of the printer fleet.

“The industrial-level SureColor F10070H enables producers to support just-in-time digital production, eliminating the need for stockpiling garments and allowing shops to easily replenish weekly demand,” Check said. “Moreover, the SureColor F10070H is one of the fastest in its price point and costs about half the price of competitive solutions available today.”

The SureColor F3070 is Epson’s first direct-to-garment printer, according to a company statement. Hosting the April 7 demonstration, which was streamed on Zoom, were Check and Matthew Rhome, who works in business development at Epson America and is considered a pioneer in the direct-to-garment ink-jet-printing industry.

“As soon as we start streaming data, the printer can prepare for the job. The operator can start loading the garment,” Check said. “The Wasatch software already did the preprocessing of that image. It pulls from the [image] library, and away we go.”

The Wasatch software also features a bar-code system. “It eliminates any type of errors, like putting the wrong artwork on the wrong color shirt. The operator doesn’t make that decision. They simply scan a bar code,” Check said. “The bar code pulls that job, sends it to the printer, and the printer takes off and we get our job printed.” This feature considerably speeds up the workflow of a job, Check added.

Another SureColor F3070 printer feature is what Check described as garment-thickness optimization. “As the garment loads into the printer, it scans the length of the garment. If you have a pocket seam, it measures and creates a profile map—the highest point, the lowest point and the largest average print area. It’s going to move and set the entire print carriage. It does this almost instantaneously,” he said. “If you have a pocket T-shirt and you don’t want to print on the pocket, [the printer] will ignore the pocket and send it to the main area of the garment. That will give the best print quality possible. It is completely configurable. If you want to print on the pocket, you say ‘Print to the highest point.’ Or if you are printing with a large hoodie, you can print to the lowest area. You can optimize ink specifically for that area where the print is going to happen.”

The SureColor F3070 printer also aims to minimize maintenance issues. “The great thing about this is that amount of maintenance is about five minutes once a month. It’s not something you have to do daily,” Check said. “You can run this machine like crazy and not spend a lot of time with a technician to go through cleaning the systems. It’s done mostly by itself using a fabric wiper.”

Rhome said that this machine and other Epson direct-to-garment printers are filling a market need. “Customization is very important. People want to have their own unique style. During COVID, we’ve seen the amount of business for one-off orders increase,” Rhome said. “It’s part of the digital acceleration of the industry. It’s very important that you are able to turn these orders quickly.”