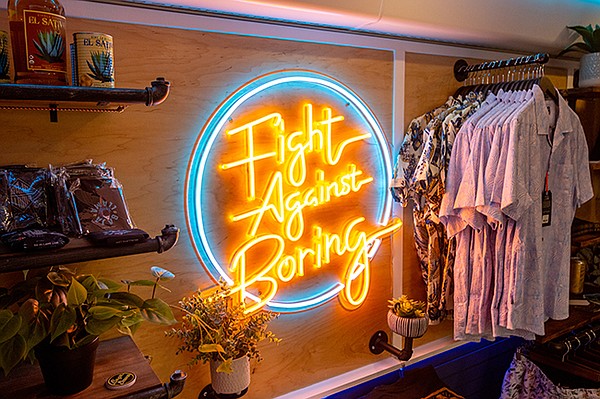 Baja Llama’s fight against boring is in their lifestyle brand of casual button-up shirts and embroidered shorts. They were featured at Project in a large RV. | Photo by Noe Garcia for California Apparel News

Project Continues to Be a Fashion Destination

Held in the Central Hall of the Las Vegas Convention Center, Project ran Aug. 9–11 and showcased the new, now and next in men’s and women’s contemporary apparel, footwear and accessories.

For buyers, Project offered premium denim, multinational apparel brands and promising startups that made passes to the event a must-have. There were also plenty of margin-building products with mid-market labels and an opportunity to connect and develop relationships with other buyers and exhibitors.

“Some of the new trends that we’re looking at are really chic and out of the box—something you don’t really see too often while you’re walking down the street,” said the owner and buyer of H.I.S. Boutique Andre Barkley.

Yolanda Graham was on the show floor with two other buyers and combing through a rack looking for items that could be more than just one thing.

“We’re specializing in looking at different items that are versatile,” said Graham, the vice president of Blurrd Linez Fashion. “Some fashions that may be ambidextrous or kind of androgynous. We’re also looking at shoes and stylish, not quite urban, gear but also business-dress casual.”

Santia Deck was part of MAGIC Men’s, a subset of Project, with her company Tronus, an athleisure-shoe company. Deck was the first female football player to sign a multimillion-dollar deal with a team, the Los Angeles Fames of the Women’s Football League Association.

“We put a lot of hard work into it. We’re known for being super super light, but also you can work out in it, you can go out in it, go to the club—it’s very versatile,” said Deck, the CEO of Tronus. “I’m very versatile because I’m very feminine, but I’m also a beast on the field, so we pretty much had to implement that into the shoes.”

Her futuristic-looking unisex shoes are $225 for a limited-edition pair, the rest are $135, and slides are $65. MAGIC Men’s gave her the opportunity to create new connections and find new customers.

The lifestyle brand Baja Llama was showcased out of a large RV on the showroom floor with CEO Jeff Anderlite in the driver’s seat.

“We want to show a lifestyle brand that is a mindset of having fun, fighting against boring [and featuring] quality apparel that’s not too expensive that has fun and unique designs and is functional,” Anderlite said. “Baja Llama is a way to think about every situation you’re in.”