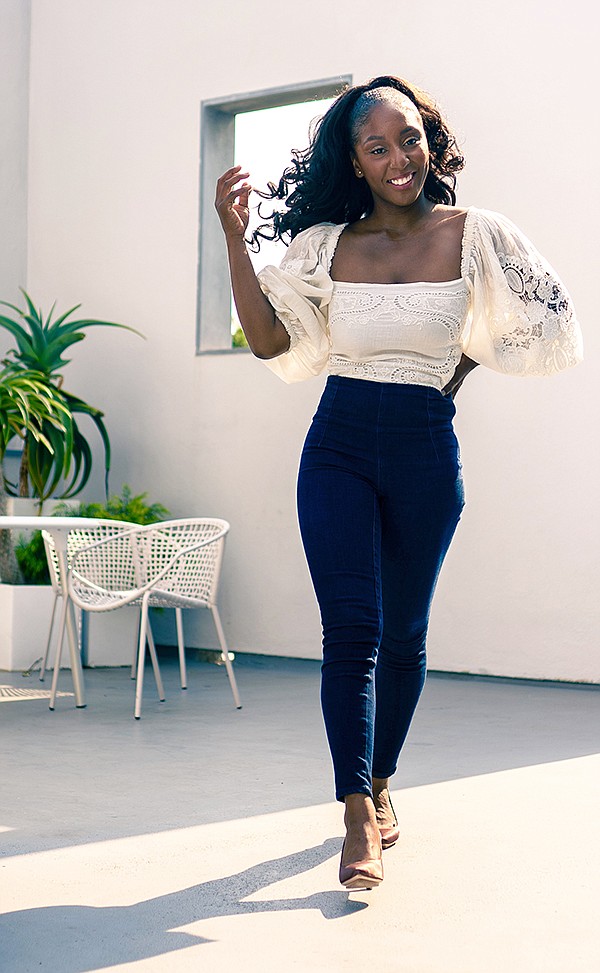 After 10 weeks of basic training in the U.S. Army, Holly Sanders had gained so much muscle that her jeans no longer fit. She created the Angel jean to not only accommodate different body shapes but also incorporated elements that would make women feel beautiful wearing it. 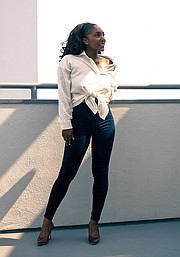 Founding her Angela fashion denim brand, which she refers to as “the best jeans ever,” was a long journey for Holly Sanders, who grew up in the small town of Barstow, Calif., but is aiming to make a big impact on the industry. Always interested in fashion, Sanders entered the U.S. Army in 2010, yet following basic training she discovered that her already athletic body would not be accommodated by her jeans after she gained a great deal more muscle.

Already seasoned in sewing, Sanders remained in Los Angeles and worked within a space at Maker City LA in the city’s downtown. Sanders also taught sewing through Airbnb experiences. While Sanders’s focus was on creating curvy-fit jeans in a unique style, the designer also learned from the pupils in attendance at the sewing classes. Sanders learned more about women’s bodies, their preferred jeans features and the elements that make them feel beautiful.

With the launch of the Angel jean, which will be released at the end of August, Sanders is including different features that will enhance her customers’ bodies and eliminate the characteristics that hinder women from feeling beautiful.

“One day in 2014, I had my sketch pad. Everything I don’t like about jeans, I am getting rid of it and changing it in some way. I started with the waistband and got rid of the belt loops because I don’t really wear belts,” Sanders, who has also worked as a teacher, said. “For my basic jean, I want to truly go from day to night—I can teach in these jeans, I can go on a date in these jeans and I can go to the dog park.”

Sanders also featured elements that would contour a wearer’s body. Rather than focusing on a bulky waistband, Sanders incorporated darts on the waist. A facing waistband is featured on the inside of the design with spandex that cinches and smooths the waist. The crotch of the jean includes a gusset, a feature that took inspiration from yoga pants, according to Sanders, and affords a flat, comfortable fit.

“I put the button and the zipper on the side of the jean. It’s really deep. It’s seven and a half inches long. When you unzip the jean, it folds all the way down to the crotch area, so the jeans fold all the way down around the butt. It’s nice because it’s easy to put on and easy to take off,” Sanders explained. “I really like that because I am curvy as far as measurements go, but if I want that hourglass look, I need a little bit of help.”

Remaining mindful when creating the ideal denim was a priority for Sanders, who incorporated a YKK recycled zipper, which is located on the side of the jean along with a button to ensure a secure, clean closure. Using Candiani denim and a natural indigo, the jeans are dyed using foam-dyeing applications to ensure a strong sustainable message. Sanders is also focused on making jeans in Los Angeles and remains cognizant of the impact that responsible supply-chain sourcing can have on the industry.

“I made sure that my fabric would be better for humans, animals and plant life,” Sanders said. “As a free woman, I ask myself, ‘Why on earth would I contribute to an industry that harms people when these people are just like my grandpa, they are just like my great grandpa [who picked cotton]?’ My great grandpa didn’t have an option. Thinking about how a human has to harvest this and it could hurt them if it’s heavily laden in pesticides, in 2017, when I sourced, I sourced as sustainable as I could.”

Available in sizes 24–40 and three lengths, Angela—named for Sanders’s mother and inspired by Los Angeles—will release the Angel through thebestjeansever.com with direct-to-consumer pricing at $150. While Sanders is focused on making women feel their best, the designer is also supporting organizations that promote the greater good.

“I call it ‘The Giving Jean,’ ” Sanders explained. “In my head, giving to others is the best thing that you can do. These jeans are not just about looking good. They’re about feeling good.”

With the release of Angel, the first initiative supported by Sanders will use proceeds from the sale of the first 100 jeans to provide reusable menstrual products to women and girls in Mexico and Ecuador. Sanders is already working on a second initiative that will provide support for veteran suicide prevention.