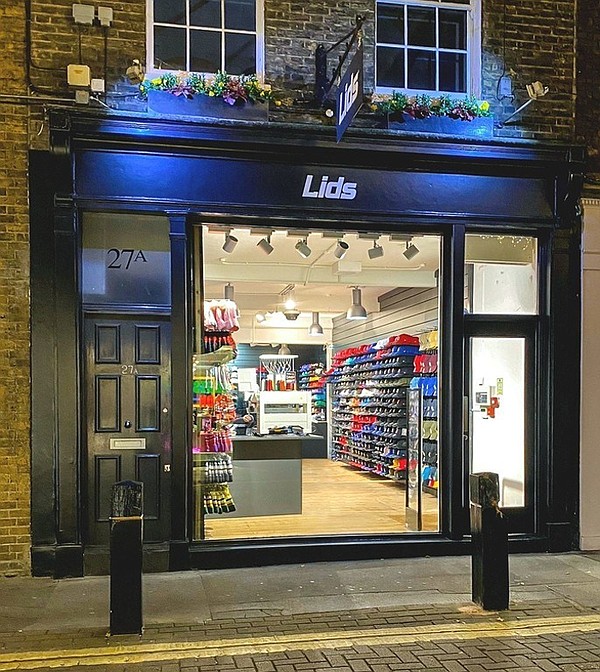 Sports retailer Lids has announced the opening of its first standalone stores in Europe. Four stores will open in December around the London Metropolitan area, including the Seven Dials location which is now open. Image: Lids

For its European debut, Lids will open four locations in the London metropolitan area, including Seven Dials and The O2 Peninsula Square in London, Lakeside Shopping Center in Essex, U.K., and Churchill Square Shopping Centre Russel Place in Brighton, U.K. All locations are opening in December, with the Seven Dials location now open for business.

Each store will offer products from an assortment of U.S. professional sports teams from various professional leagues, including the MLB, NBA and NFL among others. Each store will also feature Lids Customer Zones, where customers can custom embroider a hat or other piece of apparel in-store.

“London is a natural fit for Lids. The enthusiasm for both American sports and street wear aligns with our on-field and fashion focused hat and jersey assortment. We are excited to bring our brand and product to market,” said Britten Maughan, president of Lids. Through these four retail openings, Lids is expected to create several new jobs in the London market.

Lids is the largest licensed sports retailer in North America for fan and fashion-oriented headwear and apparel. The expansion into the European market follows the retailer’s growth into a billion-dollar business since being acquired by Ames Watson in 2019. The company operates nearly 2,000 stores in North America and also operates the newly opened NHL flagship store in New York City as well as the NBA flagship stores in New York City and London.