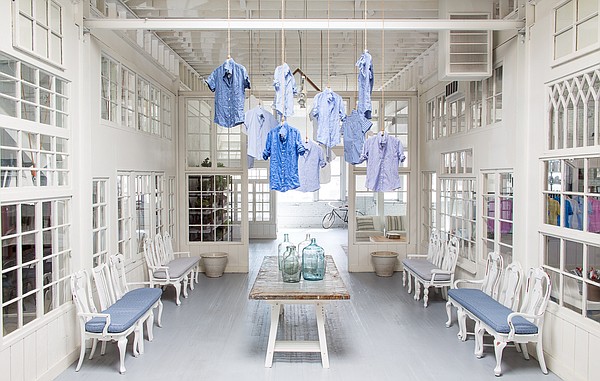 The downtown Los Angeles headquarters and showroom of Frank & Eileen, which was recently awarded B Corporation certification and committed to actively supporting the education of girls and young women. | Photo courtesy of Frank & Eileen

Building her brand upon a foundation of high standards for luxury shirting, Frank & Eileen founder Audrey McLoghlin had aligned her company with many of the principles required by B Corporation certification in corporate environmental and social awareness. McLoghlin had considered pursuing the widely respected certification in 2019, and when COVID-19 spread in 2020 she and her staff had a bit more time on their hands.

“We figured it would be a good way to make lemonade out of lemons with our new resource of time—unable to travel, unable to go to New York Fashion Week or any of that stuff,” McLoghlin said. “All of a sudden we had time that we didn’t have before. We decided this is an opportunity to lean in and go through this rigorous process.”

Beginning the process in March, the company received its certification in November, but Frank & Eileen’s milestone was not just receiving B Corp certification. With an impact score of 97.5, following an evaluation of verified performance, legal accountability and public transparency, Frank & Eileen became one of only 24 United States–based apparel brands to receive the certification. It also achieved the No. 2 score among globally recognized fashion brands in the country—second only to Patagonia—and claimed the status of highest-scoring female-owned fashion brand in the nation to be granted the certification. For McLoghlin, the steps to become certified, while challenging, included elements that were already components of the brand’s formula of creating pieces through a process the founder says has been transparent from “farm to finish.”

“It was very organic. It came from inside. When I launched the brand by accident in 2009, I did it in partnership with the international textile leader in sustainability—our partner in Italy,” McLoghlin explained. “Since day one, we’ve been partners with companies that are fully traceable, with third-party certification on all the fabrics we’ve been using.”

Founded 12 years ago using the names of her grandparents, McLoghlin’s Los Angeles brand, which relies on 100 percent female leadership, achieved its high score through dedication to a personal mission that would make its namesakes proud. As a certified B Corporation, Frank & Eileen now boasts the credentials to prove its dedication to its workers, clients, community and the environment, which has been part of its brand since the beginning.

“A lot of our customers who are loyal know what we stand for in terms of slow fashion. We didn’t wait until people were asking for it,” McLoghlin said. “We looked at it and said, ‘We would like to communicate to our loyal customers and our growing audience who we really are and what we stand for in terms of the DNA of the company.’ We just took it upon ourselves to do it.”

Not long after receiving its B Corp certification, McLoghlin announced more exciting news from Frank & Eileen. Through its giving pledge, the company has committed to supporting female entrepreneurship and leadership by donating $10 million over the next 10 years to organizations that uplift young girls and women. The initiative began with a $300,000 donation to the Malala Fund, which was made in December. As an entrepreneur who is also an industrial-engineering graduate from the Georgia Institute of Technology, McLoghlin is familiar with the challenges faced by women who are aiming to lead in business.

“I wasn’t exposed to entrepreneurship until I was 25 years old, and I had to figure it out on my own,” McLoghlin explained. “It would be incredible, at the education level, if girls could be exposed to entrepreneurship in elementary school, middle school and high school. It would be so exciting and mind-blowing what these girls could do by the time they are 18, 19, 20, 25.”

After spending the first 10 years building Frank & Eileen into the brand it has become, McLoghlin now says the focus is on the type of company she wants it to be.

“We would love to be an inspiration to all the other brands owned by women to go through this process and join the community,” McLoghlin explained. “We’ll all be stronger together than any of us are individually.”