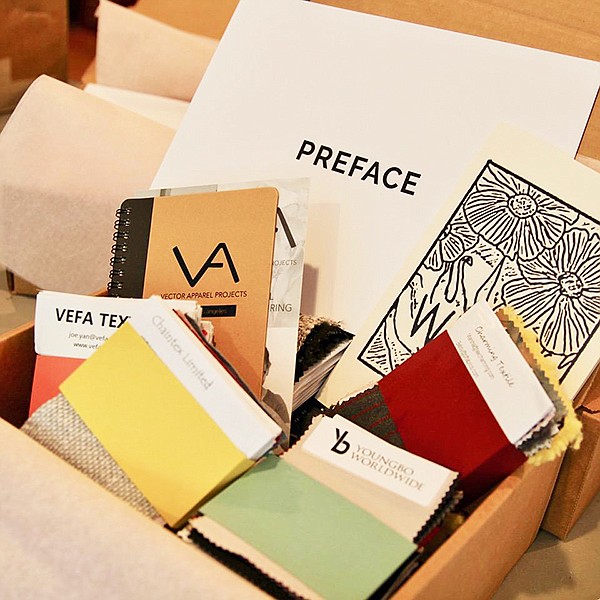 The Preface Show-in-a-Box includes textile samples, workshop supplies and gifting to afford a more-tactile experience for designers and brands in the fabric, yarn and sourcing virtual-events category. | Photo courtesy of Preface Show

After a few years hosting a boutique-style textile show in New York, Preface launched its Los Angeles edition early in 2020 during January L.A. Market Week to a responsive group of attendees who were seeking a more-intimate fabric event. Since then, Betsy Franjola, founder of BFF Studio and Preface, began to cultivate a fresh approach to events during the COVID-19 stay-at-home orders. By thinking outside the trade-show floor, Franjola developed a concept by thinking inside the box.

“We launched the Show-in-a-Box concept for Fall/Winter 2020, so that was late July and early August when we shipped out the boxes for that season,” Franjola explained. “Everybody else was going online and doing virtual things. That is fine for some, but this is fabric. You really have to touch it.”

Due to the nature of the segment that Preface represents for fiber, yarns and textiles—and its boutique approach to trade events—the new offering had to reflect a tactile experience through which meaningful connections between mills and brands are made. Despite hosting the event online, Preface provides boxes in a complimentary version and a premium $500 version that are available through prefaceshow.com, with virtual workshops that utilize the materials provided in the package. Franjola is looking forward to hosting this second virtual event, which is slated for Feb. 8–11, as partner and client feedback from the previous edition was excellent.

“They were thrilled they had those tools they needed to continue to design because everyone was stuck at home,” Franjola explained. “They had fabrics. Then we had the webinar series where they could go online so they could learn something new. We also had a really good response to the color palettes and trend guide.”

“What we try to achieve is having something for everyone. We break the boxes down into three categories. When you order, you pick women’s ready-to-wear, which is a more-dressy aesthetic,” Franjola explained. “Then we have a women’s casual, which is more cotton based, knits and things that aren’t glossy and shiny. We also have a men’s category, so we try to hone the mill selections so they fit and feel customized for the customer.”

While the Preface mission remains to serve as a place to inspire the industry’s brands and artists in an intimate setting, bigger names are also supporting the initiative. The Bombas sock company has ordered a box, as has the Los Angeles activewear brand Fabletics, which participated during the last edition, adding a natural-dye workshop to its schedule during the show. Lands’ End also expressed interest in participating again following a successful group workshop for its team that was held during the last edition.

“The workshops—you can buy them separately or two are included in the premium box. All the supplies are included, and it depends if we do a group specifically for a brand—then we’ll do a virtual live presentation. For everyone else, it’s a virtual presentation that has been filmed,” Franjola said. “We also have the cocktail hour this time around.”

Preface’s webinar schedule for its Show-in-a-Box includes conversations centered on topics such as “Certifiably Sustainable,” a discussion with Ruth Kelly of Warp & Weft and co-founder of SAACHS; Six Cheung, owner of Chaintex; and Ben Galfini, the founder of Outsider. “A Color Story” will include commentary from Mimaki’s Victoria Harris, who will explore how to organize a color story through palettes and digital printing, and a “Founders Forum,” where brand founders will share their tales of how they successfully launched their companies. Remaining committed to its immersive experience, Preface will also host workshops including a screen-printing session hosted by textile artist Kelly Marie Conder and a bundle-dyeing workshop that will illustrate the process of utilizing dried plants and flowers to dye a Meho Silk scarf, hosted by Jessica Unsell of Wild Fire Water. Wrapping up the event will be a cocktail segment featuring mixologist Pablo Moix, who will craft libations to close out the Preface Show-in-a-Box.

These workshops and webinars reflect Preface’s longstanding commitment to sustainability. For Franjola, the event remains a resource to simplify this process of cultivating ecological responsibility in fashion.

“It’s easy for people to get overwhelmed or turned off by the amount of information you seemingly need now to become sustainable,” Franjola said. “One of the things we always talk about is that there is something for everyone in that world, whether you want to focus on recycled as a message, biodegradable, natural fibers, chemical management—there are all these different roads you can go down and take a minute to figure out your brand and what would resonate most with your customer.”