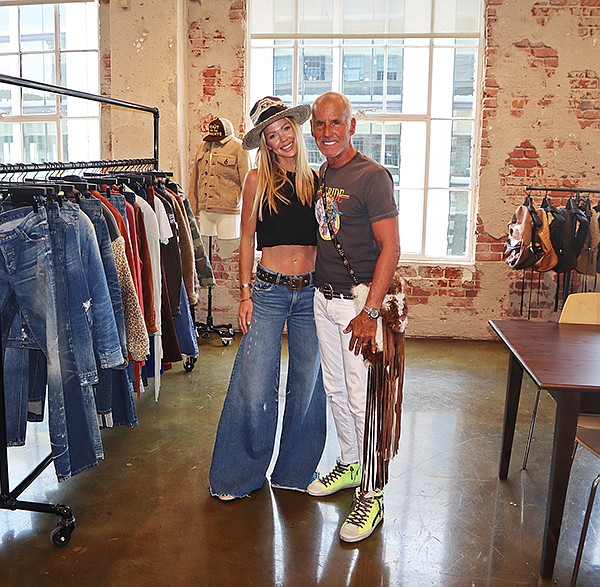 Jeff Lubell and his wife, Carrie, co-designed the Coût De La Liberté line, based on a freedom theme that is fresh and fun. 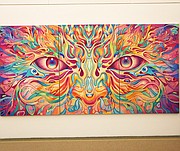 The art installation “Psychedelic Prospective” by Zach Statler lined the lobby of the Cooper Design Space for market.

From June 13 to 16, retailers from across the country migrated west for Los Angeles Market Week, as California’s economy prepared for its official June 15 reopening. Buyers gathered at the California Market Center, The New Mart and the Cooper Design Space. There was a refreshing air of freedom and an assertive push for new goods as well as those available immediately.

Renovations on the CMC began in January of last year, and the site was fully operational during L.A. Market Week with the project’s completion scheduled for September. Many of the newer showrooms such as DL1961 Premium Denim and the Junkie Boutique/Kayvolution were installed in the updated spaces. Some showroom representatives have noticed that a number of emerging fashion businesses are moving into the CMC, in addition to Black-owned spaces such as the aforementioned showroom, Junkie Boutique/Kayvolution. According to Owner Kristian Chapple, they opened up their doors in March.

DL1961 Premium Denim sales representative Tai Parker noted that the trend was away from classic skinny-jean silhouettes. “For women’s, nothing skinny anymore—everyone wants a wide leg or a straight cut,” Parker said. DL1961 opened at the CMC in January, and this was its third time participating in L.A. Market.

Matthew Mathiasen, senior manager of events for the CMC, greeted buyers on the second floor of the building as a D.J. spun music and a barista served coffee from a mobile café. Mathiasen confirmed that traffic has been significantly different since the pandemic; however, there have been glimmers of a revival happening.

L.A. native Stella Chilgevorkyan, owner of the online boutique Maison Du Trois, said that her customers are looking for something they can wear to yacht weddings, outdoor birthdays and other events. Chilgevorkyan’s customer demographic consists of women ages 25–35. She has been on the hunt for the “newest best thing” with an ideal wholesale price point between $30 and $80.

Chilgevorkyan summarized this season’s market by noting, “There’s a lot of sweats—everyone had a lot of sweats in their stores, everything was about being comfy and cozy. I feel like in this ‘new 2022 coming-in year’ people are going to want to be more dressed up—they’re going to be over the comfortable.”

DL1961, which enjoyed its third L.A. Market Week after opening in January at the CMC, displayed its pieces at its updated showroom space.

Newness reigns at The New Mart

On June 15, California State Governor Gavin Newsom announced the nullification of the Safer at Home executive order that had been in place since March of last year. Embodying that wave of breaking free is True Religion designer Jeffery Lubell. Within his new luxury brand, Coût De La Liberté, the vision of a revolution unfolds.

Coût De La Liberté translates to “cost of freedom,” and Lubell designed a line of statement pieces that capture the eruption of this new energy. Within his spacious New Mart showroom, which opened two weeks prior to market, each piece demanded attention, radiating a restored courage to live.

During a tour of the space, Lubell explained, “I opened up the showroom to give the feeling of the brand.” The denim pioneer is looking to paint a new aesthetic that signifies the heaviness of social distancing is no more. Coût De La Liberté is a lifestyle; those aligning with the brand include iconic music artist Lenny Kravitz.

The Coût De La Liberté Fall/Holiday collection was on display, and every piece carried an air of rebellion with metallic and fringe finishes, exaggerated bell-bottoms, and exotic textures such as velvet denim. Materials are imported from Italy, and pieces are constructed in Los Angeles.

Striking while it’s hot at the Cooper

Artwork designed by Zach Statler adorned the Cooper Design Space in a series entitled “Psychedelic Prospective.” Used to illustrate market week, Statler’s pieces lined the lobby and traveled throughout the building on each floor directory. Building management for the Cooper worked with Statler to display his work as an exhibition from June 1 through 25. His inspiration was pulled from interdimensional realms of the mind.

Generally, retailers were looking for dresses and occasion pieces that could be worn at weddings and graduations. For the Hunter Bell brand, located in the Trade Showroom, a magenta A-line dress with bishop sleeves served as one of the top sellers. The piece is made of a lightweight and breathable material, but the magenta color is rich, elevating the style of the dress.

At the multi-line contemporary Showroom Sixty Six, sales associate Alexandra Owen said buyers were heavily influenced by orders that could be filled immediately. Owen said the reason was “probably because all of the companies have been closed for the past year and a half and they haven’t been able to get new product in—they’ve been trying to get old product out.” The force of the COVID-19 shutdown played a major role in shifting the direction of fashion and retail needs.

Owen noted that a few clients asked for orders to be pushed back toward September as they’re banking on the rise of international tourism. However, the majority of her clientele was searching for Immediates. One of the brands in Showroom Sixty Six, French Twist, was showcasing accessories embellished with Swarovski crystals priced at $20 to $40 wholesale.