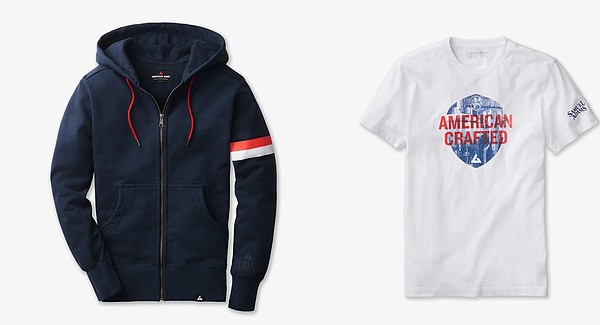 Proud of its commitment to domestic production, San Francisco made-in-America apparel brand American Giant has joined Boston brewer Samuel Adams to release products complementing the beer brand's limited-edition American Crafted brew that has been released to coincide with the July 4 holiday. The Cheers to Good Company Samuel Adams X American Giant collaboration celebrates the connections between common links such as community and friendship. In addition to Samuel Adams’ American Crafted brew, American Giant has released a T-shirt and hoodie complementing the spirit of the Cheers to Good Company campaign.

“American Giant and Samuel Adams are all about two things: quality and values. Simple as that,” said Bayard Winthrop, chief executive officer and founder of American Giant. “Using the highest quality ingredients is of the utmost importance—whether for a classic sweatshirt that can be passed down for generations, or a carefully crafted beer. We’re proud to work with Samuel Adams, a company that shares our commitment to quality and craft.”

Available through the American Giant website and at the brand's retail locations, in addition to the Samuel Adams e-store, the Classic Full Zip: Samuel Adams Edition hoodie retails for $118, while the American-Crafted: Classic T is available for $38. Sizing for the hoodie and T-shirt ranges from S-XXL. The apparel line is 100 percent sourced and produced in the United States, while the beer is crafted using domestically sourced ingredients.

“In the spirit of Independence Day, we’re keeping good company with American Giant and coming together to bring drinkers a delicious limited-edition lager to complement any summer gathering,” said Rich Ferrell, a Samuel Adams brewer. “When brewing American Crafted, we wanted to channel the lager tradition to create a balanced yet elevated unfiltered Kellerbier style with grassy notes, spicy noble hops and herbal aromatics for a flavorful beer that captures the essence of meaningful summer celebrations this season, and that can bring our communities together through our shared commitment to quality, creativity and innovation.”