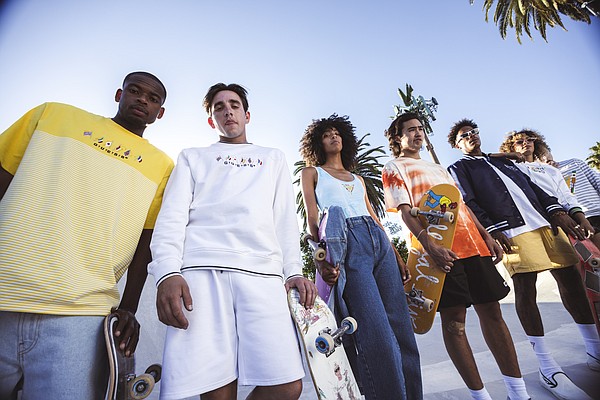 Guess has released its new 2021 Guess Original Summer Games collection with nearly 50 pieces for both men and women. Photo: Guess.

In honor of the Summer Olympics, Guess has released the 2021 Guess Original Summer Games collection.

The huge collection is a variety of sportswear-inspired T-shirts and other styles featuring graphics from the company’s archives that speak to unity and Guess’s global imprint in more than 100 countries.

The 48-style collection—consisting of apparel and lifestyle accessories for both men and women—had each of its graphics revived from the 1989 Guess Worldwide collection. The collection, which ranges in price from $12-$128 retail and focuses on the need to establish peace and unity, was made available on July 15 in select Guess stores globally and at guessoriginals.com.

“Initially, we found some great pieces from 1989 that had the Guess Worldwide graphics featured in the new capsule,” Director of Brand Partnerships and Specialty Marketing Nicolai Marciano said. “This was during the height of the pandemic and sports wasn’t the driving factor as much as bringing everyone together was the source of inspiration.”

The Summer Guess Originals Collection takes inspiration from classic Guess heritage graphics and puts a modern spin on them. And with sportswear and the 1989 collection as the core of the capsule, the pieces—which include short-sleeve tees, sweatshirts, sweat shorts and sweatpants for men and cotton dresses, crop tops and bodysuits for women—complement each other seamlessly. It also includes accessories such as bucket hats, socks, fanny packs and backpacks with the entire collection featured in a traditional Americana such as red, white and blue color tones.

“Reviving old graphics and silhouettes is the ethos of our Guess Originals brand,” Marciano said. “Borrowing from our history and reinventing for current styles that will introduce timeless moments to a new generation.”

“The campaign deserves a moment of appreciation,” Marciano said. “Atiba Jefferson shot it and is well known for his work in photography with skateboarders and other athletes as well as featuring some key skaters from the Illegal Civ skating crew based here in Los Angeles. With skateboarding making its first appearance in the Olympics and us being a SoCal brand, it fit perfectly into our DNA.”