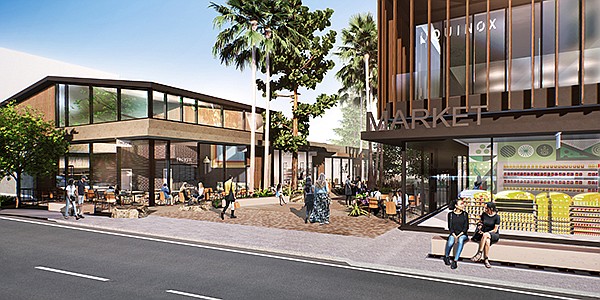 The Shops at Sportsmen’s Lodge, a 95,000-square-foot space in the San Fernando Valley formerly occupied by a meeting-and-convention facility, will welcome visitors during late summer or early fall 2021 following a $100 million redevelopment.

A Unique Blend of Community, Commerce at The Shops at Sportsmen’s Lodge

A historically rich Studio City, Calif., site will experience a renewal as The Shops at Sports­men’s Lodge welcomes visitors during late summer or early fall 2021 following a $100 million redevelopment. The 95,000-square-foot space will replace the property’s formerly occupied meeting-and-convention area.

Much effort was also dedicated to preserving the site’s history. Dating back to the 1800s, it served as a refuge for many well-known personalities, including those from the golden era of Hollywood in the 1940s. Parent company Midwood Investment & Development has preserved its ties to the area through the roots established by its founder, Samuel Lemberg, and also included the Weintraub Real Estate Group on the project.

“Midwood was started in 1925 by the current CEO’s grandfather, and, in addition to being a real-estate developer, he was also a financier. He financed the original development of the hotel that sits on the site now,” explained Lease Director of Midwood Ron Bondy. “As part of the structure of that deal, he kept the ownership of the land underneath the hotel. It was a portion of the current nine-acre site.”

Eventually the land surrounding Lemberg’s parcel was put up for sale—a prime opportunity for Midwood to expand yet also maintain the legacy of the area through the purchase.

It is Bondy’s hope that this space will become a daily destination for residents, students and those who work at nearby studios. By highlighting California brands—specifically those from the state’s southern and Los Angeles regions—an opportunity arose to create genuine connections within the community.

“We didn’t want this project to feel commoditized,” Bondy said. “There are brands like Civil Coffee out of Highland Park; Tuesdays Sweet Shoppe, a local candy store out of Los Feliz; Tocaya, which is an L.A. brand; and Vuori, the athleisure brand—when we made the deal, it was still a Southern California brand. They had not gone national yet.”

The opportunity to expand its local presence as part of a unique project aligns with Vuori’s plans. While the Encinitas, Calif., brand had been preparing for a nationwide rollout, it also wanted to continue fortifying its presence in Los Angeles when planning for The Shops at Sportsmen’s Lodge began.

“At the time, we had our little Manhattan Beach store. We now have Malibu, but we were really looking for unique opportunities in the Los Angeles market with new projects,” said Vuori Senior Director of Retail Catherine Pike. “We loved the co-tenants and were super excited about Erewhon. The community in Studio City—people being outdoorsy, loving to get out and be active and into fitness—it’s a really cool opportunity.”

Sharing a space with a unique roster of businesses and co-anchor Equinox was attractive to Erewhon Chief Development Officer Yuval Chiprut, who was also drawn to the Studio City area.

“Studio City is a robust market. Our customers and our demographics are in that area,” Chiprut said. “We know that some of those customers come to our other stores, and we wanted to service them in the Valley.”

The work of Midwood’s architectural partner Golin and landscape-architecture firm Olin also informed Erewhon, as the natural elements and consideration for the existing environment speak to the brand’s mission. Olin’s focus on maintaining the natural surroundings—such as retaining the property’s redwood trees—afforded a design foundation for Erewhon.

“We paid homage to the rich redwoods that are there and made our store out of walnut to accent them,” Chiprut said. “All the decisions were so well thought out, they seemed to be obvious.”

Through creating a special approach to a retail and service destination, there was room for cultivating relationships among businesses, yielding an atmosphere of camaraderie.

While the light of hope exits at the end of this dark COVID-19 tunnel, those involved in The Shops at Sportsmen’s Lodge hope that this spirit of community remains as normalcy returns.

“Something I want to set as an intention is that our store leadership really gets to know very early on the other members of leadership within the center so we can support one another,” Pike said. “Every person who comes for an individual thing is going to discover a lot of other brands because of that.”