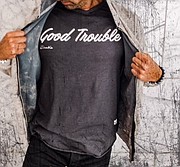 Looking back on his 16 years in business, Blayne Siegel, president and founder of Kinetix Casual Luxury, is grateful for his long journey to veteran status in the space of creating luxurious T-shirts and other relaxed styles. Beginning his career in production with brands including L.e.i. and Fox Racing, Siegel received a comprehensive education in making clothing before starting Kinetix in 2005, but reaching the top was no easy feat.

“I suffered for about two to three years just selling to anyone that would take the goods and shipped C.O.D.s that would bounce back to me and not get paid. Then I switched gears,” Siegel explained. “I started to make a higher-end, quality product. I started to use a lot of Pima, bamboo, high-end and super-soft French terries, and I got into stores that were very prestigious—Fred Segal, Lisa Kline, M.Fredric and H.Lorenzo.”

The shift paid off as Siegel discovered that having the appropriate wholesale partners made all the difference in his brand. To reach a luxury consumer he had to offer a luxurious product.

“Luxury is a mindset. When you feel something that is high quality and you put it on, it elicits a great feeling inside of you and you don’t want to take it off. When I say ‘casual luxury,’ which is the brand’s name—Kinetix Casual Luxury—it’s clothes that are timeless,” Siegel said. “Casual is more relevant than ever, and we’ve been doing this a long time.”

In addition to sourcing materials that make his customer feel good wearing his brand, Siegel remains committed to domestic production. For full transparency, he will say that 99 percent of the brand is made in the United States. Remaining dedicated to producing most of his goods in Los Angeles, Siegel enjoys the accessibility of domestic production and also feels the city’s apparel-making heritage is an excellent fit for his mission.

“You have a lot of fabric right here that you can choose from that is well made. The skilled laborers, the people that are cutting and sewing and in the dye houses,” Siegel said, “it’s been going on here forever. Why not tap into the knowledge of all these different resources?”

There is also an element of style for which Kinetix is known that applies to its T-shirts, which include core elements such as long- and short-sleeved designs in classic and fresh colorways and dye applications. The brand is also known for its graphics with relevant messaging such as a design from the recent New Dawn collection that reads “Good Trouble” and another with an image of a regal lion and the words “Lions Don’t Lose Sleep Over the Opinions of Sheep.” For Siegel, one particular collection from 2012 stands out from the others as his favorite project.

“I had a really cool, nostalgic run with Warner Bros. where we were doing collections around the Christopher Nolan movie ‘The Dark Knight Rises.’ I loved working with the studio and doing movie memorabilia. We did windows at the Santa Monica mall with Kitson using the actual Bane villain mask,” Siegel recalled. “That was a really cool time. It felt like we really put a flag in the ground and were respected as a brand.”

As Kinetix observes its 16th anniversary and while the memories of the journey can become a bit fuzzy, Siegel keeps fresh in his mind important words of advice he was given long ago by a denim maker. “He told me, ‘Stay true to who you are. If you’re known for one item, and people are going to pull you in different directions to work on different items, always stay true to what you do well,’” Siegel explained. “That is great advice I got early on and it’s never been more relevant than now.”

Available through select retailers and at kxclothing.com, Kinetix Casual Luxury T-shirts retail from $42 for a graphic to $69 for the Cantana long sleeve. Sizing ranges from XS through XXL.