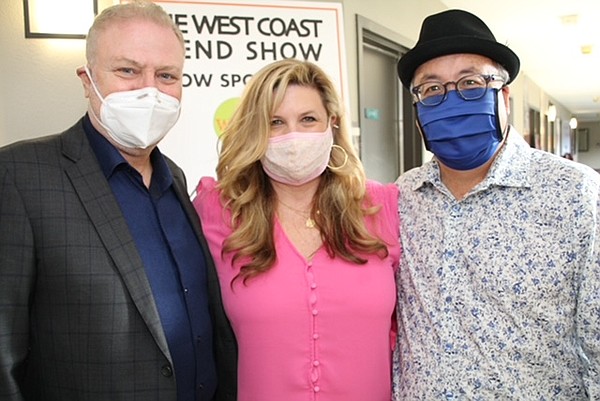 The novelty of doing a live show attracted some first-time exhibitors including Gil Gomez of the Black Circle Agency.

The West Coast Trend Show is a biannual trade show for better men’s lines that has taken place at the Embassy Suites near LAX since 2008, said Ken Haruta, the trade show’s owner. WCTS never canceled a show through the crisis. Its last show took place in August 2020 after the Los Angeles County Department of Health allowed for some limited in-person interactions, which included small, hotel suite–style meetings, which WCTS has traditionally produced.

However, COVID-19 did hurt the trade show’s vendor and retailer attendance, Haruta said. He estimated that vendor attendance was down more than 50 percent compared to the show’s zenith in August 2019, when WCTS occupied six hotel floors, four for exhibitor rooms and two for retailers who flew in for the show.

Since WCTS’s beginning, the better men’s trade show has been pitched as a no-frills regional show. Exhibition prices are kept relatively low, with $850 for a hotel room to exhibit and $750 for an early-bird rate. Retailers shopping at the show often stay at the Embassy Suites and pay only $99 for a room, Haruta said.

While the show’s affordable cost has always attracted exhibitors, it was the novelty of doing a live show that attracted some first-time exhibitors this year including Gil Gomez of the Black Circle Agency.

For veteran exhibitor Mario Pasillas of the 7 Diamonds brand, WCTS was a way to show a vote of confidence in the business.

“Since there are no trade shows going on this season, we decided to do it this weekend,” Gomez said. “We secured a couple of new accounts, and we managed to make a few appointments. At this point in time, with all of the stuff that has happened with COVID and how the wholesale industry is a little different due to the pandemic, we’ll take what we can get.”

For veteran exhibitor Mario Pasillas of the 7 Diamonds brand, headquartered in Tustin, Calif., the show was a good place to show a vote of confidence in the business.

WCTS also represented an opportunity to introduce brands. The Danish brand No Nationality made its first West Coast trade-show appearance at WCTS. Its trade-show debut was in Dallas recently, said Jonathan Bernal, a sales representative working with the brand. The show was the right place to show the brand’s relaxed yet stylish looks.

“Customers are more value-minded. They want to be more comfortable and relaxed but still be dressed well,” Bernal said.

Roth said that the pandemic, as well as retailer hardships from firestorms in Northern California in the past few years, have taken a bite out of business, resulting in fewer independent Northern California retailers. “This is a quiet show, but people are coming in and buying,” Roth said.

One retailer who shopped at WCTS was Reza Shekarchian, co-owner of the better men’s store Avedon, which has been based in Beverly Hills, Calif., for the past 13 years. Shekarchian appreciated the regional show’s user-friendliness. “I can hop in a car and go there for a couple of hours,” he said.

But due to the pandemic he said that he was ordering less. He also noted that vendors were playing it safe. “It’s the same concepts as last year with new colorations,” Shekarchian said. “At Avedon, people are buying upbeat colors. They’re not going for black and navy. It’s more earth-tone colors than dark colors.”

He also forecasted that customers would want to release pent-up demand for goods and go shopping in the fall when restrictions are further eased.