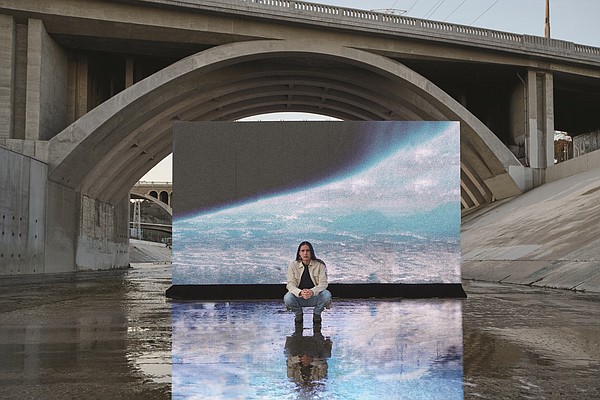 As part of Levi's Buy Better Wear Longer campaign, climate activist and musical artist Xiuhtezcatl created a short film with the brand to support messaging to save the planet. Photo: Levi's

Launched last month as part of Levi's initiative to create a cleaner fashion industry that will help heal the planet, the Buy Better, Wear Longer campaign encourages consumers to purchase quality products that will last. Climate activist and artist Xiuhtezcatl created a short film with the brand to support this messaging. In “Reimagining Our Future with Xiuhtezcatl,” the artist shares sentiment that reflects a generation on the cusp of adulthood that is aware and determined to change the world, yet hopeful.

“The last year has shown us the power that the people have to not just reimagine the systems and the structures in the world that exists around us but to push for that as a political reality and a social reality. There is not a lot more time to sit around and debate it,” Xiuhtezcatl said in the film. “People are suffering right now from the climate crisis. We saw what has happened, whether it was in Texas or the wildfires on the West Coast. We have to reorient ourselves to be in more of a reciprocal, balanced, regenerative, relationship with the planet.”

With a group of fellow youths, in the film Xiuhtezcatl is seen running along the Los Angeles River, as footage of the artist's work in the studio, in concert and simply reflecting in peaceful solace flashes across the screen. With Xiuhtezcatl's voiceover blending with the imagery, the eco-aware messaging is clear.

“You have this space and this opportunity to speak, to tell these stories, to reflect my reality of a young Indigenous person going through the world and figuring things out,” Xiuhtezcatl explained in the footage. “Our whole generation is thinking about this kind of stuff because we were born into a world that was changing all around us and we are at the forefront of really pushing things in a different direction. Transformative change comes from people imagining alternative futures and then doing the work to build it. I see that strongly among my generation.”

As Levi's has committed to more environmentally sound practices, it has adopted cottonized hemp, organic cotton and employed its WaterLess manufacturing. The San Francisco company revealed that 76 percent of all Levi Strauss & Co. products and 70 percent of all Levi’s bottoms and trucker jackets rely on WaterLess technology, which was founded on finishing techniques and water-recycling guidelines. Through working with these tools, the company has saved more than 4 billion liters of water and recycled nearly 10 billion liters of water since their introduction in 2011.

Xiuhtezcatl has produced tracks such as “What the Frack” and “Speak for the Trees,” which blend hip-hop sounds with environmental-activism messaging. In a campaign that began April 19, Levi's enlisted the help of additional ambassadors including Jaden Smith, Emma Chamberlain, Marcus Rashford, Xiye Bastida and Melati Wijsen. “Reimagining Our Future with Xiutezcatl” is available for viewing through Levi's YouTube channel.