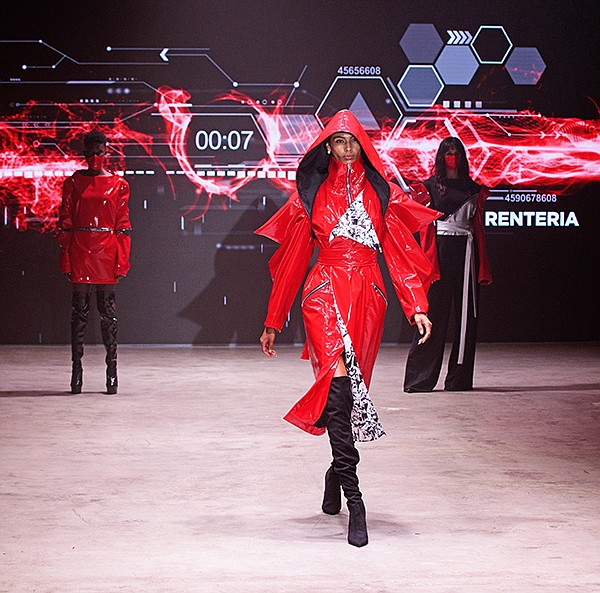 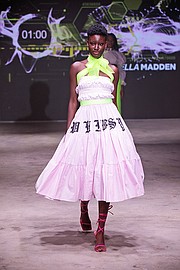 The Fashion Institute of Design & Merchandising created a virtual space that afforded a platform for its Advanced Fashion Design program graduates to showcase their work. More than 100 garments from nine designers who graduated from the downtown Los Angeles school were unveiled during a presentation broadcast through YouTube.

For Dustin Argumendo, the show was an opportunity to challenge the concept of machismo, a characteristic of exaggerated masculinity in Latinx culture. Blending men’s tailored suiting with streetwear, Argumendo used messaging such as “No Soy Macho, Soy Machismo,” translating into “I am not macho, I am machismo,” printed on a crop top and a sweatshirt that stated, “The tragedy of machismo is that a man is never quite man enough.”

Lily Moon delivered classic women’s tailored garments with modern details such as a blazer with oversized, pillow-like layered sleeves featuring a tulle underlay and tied front and an A-line, floor-length velvet skirt with ruffles over the left knee. The striking juxtaposition of fine tailoring with unique details fit together to establish the collection’s aesthetic.

The collection from Zak Weinrich featured pieces based on intimate apparel that had been reimagined as fashionable garments. A pinstriped gray bodysuit featured ruffles reaching out from the hips and buttoned bishop sleeves inspired by a classic white button-down dress shirt, while a black corset with sheer bodice and visible boning was paired with a classic gray-plaid blazer and black tapered-leg pants.

Bella Madden showed a collection in bright neon green and soft pink that brought playful elements to formalwear. A pink-and-white horizontally striped floor-length gown with an empire-waist belt with bow in shimmering lavender featured adjustable straps that included side-release closures worn over a long-sleeve, neon-green T-shirt cut just below the décolletage. A neon-green, bishop-sleeve blouse with pussy bow featured an “Alice’s Adventures in Wonderland” theme and was paired with a pink-plaid miniskirt.

A cartoon approach defined Jairui “Ruby” Cai as the designer featured oversized and pillowy pieces. A large jacket in brown with a high neck and two vertical rows of yellow buttons was finished with oversized yellow sleeves and paired with brown knee-length shorts. An ankle-length gown was designed in a teardrop shape with yellow pillow side details that included wiggle eyes on each hip, while a T-shirt top featured attached oversized pink gloves and was finished with the embroidered phrase, “Someone asked me to do a gown FINE!”

With bright springtime notes, Jesua Rodriguez created pieces that speak to the jet-setter who is finally able to travel to a destination that demands chic garments. A ruffled top in pink, white and green was gathered into the middle to resemble a floral bloom, and complementary off-off-the-shoulder sleeves were allowed to shine when paired with white Bermuda shorts. A sleeveless pink blouse featuring green-stemmed white flowers with orange-yellow pistils was tucked into orange high-waisted, pleated, wide-leg pants and was complemented with a matching front-tie, high-collared capelet.

Vibrant colors in festive silhouettes were on hand at Sofia Masuda’s presentation, in which models wore floral crowns to complement the garments. A crop shirt in cerulean featuring a gauzy overlay was worn with purple wide-leg pants that were accented with a scribble pattern in plum and were also dotted with crocheted flowers in multiple colors. Also featured was an ankle-length dress comprising five layers of ruffles in purple, pink, blue and yellow scribbled florals.

Strong silhouettes on classic pieces were found in Fabian Renteria’s collection, which was focused on fire-engine red, white and black for its garments and face masks. Renteria included a shiny red oversize-hooded midi-length rain-slicker dress lined with a black-and-white geometric lining and featured exaggerated shoulders and zippered slash pockets. A black-and-white floral tube top with a red-and-black V-shaped inlay was accompanied by genie pants with a long, thin, ribbon-style belt and ties at the calves.

The event, which was streamed on Aug. 12, is available for viewing through the FIDM website at fidm.edu/en/calendar/debut/.