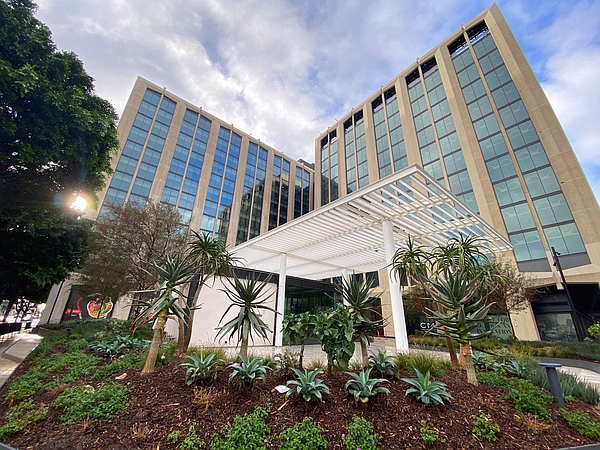 As the California Market Center unveiled its fresh space on Jan. 11, following a $250 million–plus renovation, property manager Brookfield Properties announced that it would welcome global athletic-apparel brand Adidas AG, which signed a lease for 107,000 square feet of space at the downtown Los Angeles site. As the anchor office tenant at the CMC, Adidas will occupy the top floors of two interconnected buildings, including a private 5,000-square-foot skydeck.

“For over 50 years, the CMC has served as a historic cornerstone for L.A.’s most forward-thinking entrepreneurs in the fashion industry,” said Bert Dezzutti, executive vice president of the Western region at Brookfield. “Now, the new CMC has been reimagined to appeal not just to fashion-focused commerce but also to creatives from the technology, entertainment and media industries. We’re excited to welcome Adidas, one of the world’s most recognized and valued brands, to the new CMC.”

The CMC deal with Adidas is reportedly the biggest office lease to be negotiated for a downtown Los Angeles office space in more than a year, according to the Wall Street Journal.

Working with architecture-and-design firm Gensler and Turner Construction, the CMC renovations were recently completed after a project that began at the end of 2018. The site was originally developed in 1963. Renovations of the CMC’s three interconnected 13-story buildings included updating the exterior façade with energy-efficient floor-to-ceiling windows, the addition of sunlit skybridges that connect floors between each edifice and a ground-floor public space. The ground-level space, which formerly included a bank building, now serves as an open pavilion, which includes café seating, a performance space and pedestrian pathways.

As part of its plans for the ground-level space, Brookfield intends on devoting 150,000 square feet to local and regional street-level retail. The property-management firm has signed a lease agreement with Urbanspace, a development firm focused on immersive public markets. At the CMC site, Urbanspace will open its first Los Angeles location. This area will feature 19 food-and-beverage vendors from the local Los Angeles region.