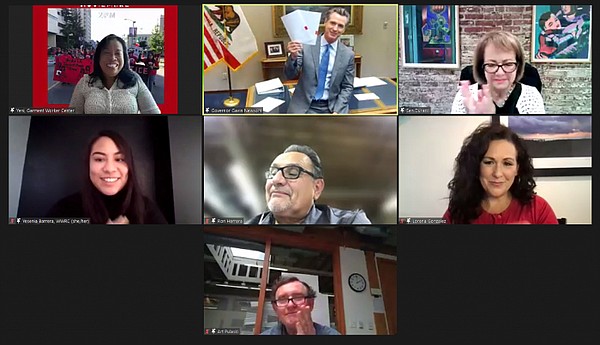 Gov. Gavin Newsom signed hundreds of new bills into law in 2021, with a number of workplace and labor laws that began on Jan. 1, bringing changes to employment practices and workplace safety. The apparel industry in the state is expected to see major changes as laws protecting garment workers went into effect and change how they are paid for their work.

Senate Bill 62, known as the Garment Worker Protection Act, went into effect on Jan. 1 and abolished piece-rate payment in the state. The law made California the first state to require hourly wages for garment workers and makes brands and retailers liable for wage theft and illegal pay practices. Gov. Newsom signed the bill into law in September 2021. A different Garment Worker Protection Act was introduced in September 2020 but failed to reach the voting stage before the end of the legislative session.

The law has a significant impact on the apparel industry and has been a divisive issue. California has the highest concentration of garment-industry workers in the U.S., with Los Angeles employing over 40,000 people throughout around 2,000 factories. Investigations in previous years have shown poor working conditions in addition to workers being underpaid.

The California Chamber of Commerce called the bill a “job killer” and called for Gov. Newsom to veto it. The Chamber of Commerce said the bill would do nothing about the “bad actors” that are breaking the existing law and would make retailers leave the state and conduct their businesses elsewhere. The American Apparel & Footwear Association said the bill would impose liability on businesses with no control over the garment workers.

The fight to pass the bill was led by the Los Angeles Garment Worker Center and was supported by over 140 business-industry members, including fashion brands Reformation, Doen, Mara Hoffman, Eileen Fisher, For Days and Another Tomorrow.

In line with the attempts of SB 62 to curb wage theft, Assembly Bill 1003 makes the intentional theft of wages, including gratuities, in an amount greater than $950 from any one employee or $2,350 in total from two or more employees by an employer in any consecutive 12-month period punishable by grand theft under state law. The new law defines theft of wages as “intentional deprivation of wages as defined in Labor Code section 200. Under the provision, independent contractors are included within the definition of an employee.The bill passed the California Assembly in May 2021 by a vote of 78–0 and passed unopposed by the Senate Public Safety Committee in June before being signed by Gov. Newsom in September.

California also passed Assembly Bill 701, which aims to regulate and control the use of quotas in warehouses, which would help reduce workplace injuries and ensure employees cannot be fired or retaliated against for not meeting unsafe quotas. It is the nation’s first law that makes companies disclose productivity requirements and work-speed metrics set for employees. Employers must provide each employee upon hire or within 30 days a written description of each quota that applies to the employee as well as any adverse actions that may be taken if the quota is not met. The new law also prohibits employers from requiring quotas that prevent employees from taking compliant meal and rest breaks.

AB 701 also enables the labor commissioner to issue citations and enforce the bill. The Division of Occupational Safety and Health or the Division of Workers’ Compensation must notify the commissioner if a worksite or employer has an annual injury rate of at least 1.5 times the industry average.

Senate Bill 606, which also was signed into law by Gov. Newsom in September, aims to strengthen the California Division of Occupational Safety and Health enforcement powers by creating two new categories of Cal/OSHA violations—enterprise-wide violations and egregious violations. SB 606 creates a rebuttable presumption that an employer with multiple worksites will have committed an “enterprise-wide” violation if Cal/OSHA finds the employer has a noncompliant written policy or procedure or if Cal/OSHA has evidence of a pattern or practice of safety violations at more than one worksite.

SB 606 also allows Cal/OSHA to give citations for “egregious violations” of an occupational safety or health standard, order, special order or regulation. The new law allows Cal/OSHA to consider each instance of an employee exposed to that violation a separate violation for issuance of fines and penalties. SB 606 also provides Cal/OSHA with increased subpoena power.

The bill was authored by Sen. Lena Gonzalez (D–Long Beach) and is expected to largely impact the construction and manufacturing industries as well as big-box retailers. Labor unions supported the bill, while the California Chamber of Commerce opposed it because it gives more enforcement power to Cal/OSHA.

Assembly Bill 1561 and Assembly Bill 1506 create more exemptions than Assembly Bill 5, also known as the “gig-worker bill,” which went into effect Jan. 1, 2020. AB 1561 exempts insurance-claims adjusters, insurance third-party administrators, construction-industry subcontractors and manicurists from the ABC test for determining whether a worker is an independent contractor. AB 1506 exempts newspaper carriers from the ABC test. These exemptions are set to expire on Jan. 1, 2025.