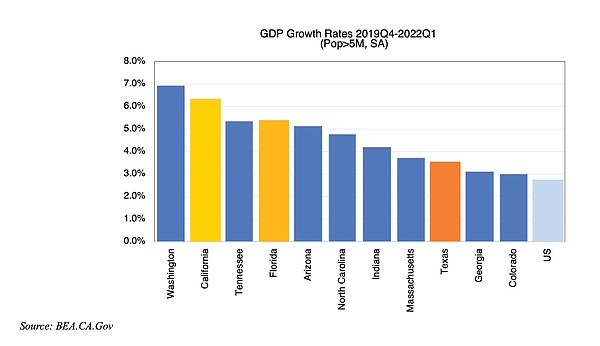 According to the old song, it never rains in California, but the prospects for the Golden State are more optimistic. According to the forecast, “Strength in a number of sectors will buoy the economy, while increases in defense spending and demand for technology will likely keep it growing. The greatest risk to the state’s robust economy remains the economic weakness in the rest of the country, in sectors such as transportation and logistics, as consumers nationwide continue to shift from goods to services consumption.”

Still, perpetual sunshine isn’t enough to keep everyone here. In the report, released Sept. 21, UCLA Anderson Forecast Director Jerry Nickelsburg examined the impact of the state’s recent declines in population on its economy, noting that migration to other states, coupled with a lack of international immigration and lower birth rates, has resulted in a historic reversal of California’s annual population gains.

With a GDP of $3.36 trillion, California still holds its place as the fifth-largest economy in the world. Nickelsburg’s analysis shows that California is chasing Germany for the fourth spot in the world’s GDP rankings, and California households are becoming wealthier on average than those of other states. Investors continue to flock here, and domestic out-migration is beginning to taper off thanks to the decreasing affordability of alternative cities. California’s strongest sectors include leisure and hospitality, healthcare and social services, technology, and construction, each of which posted solid gains in 2021.

California remains an expensive place to live, a challenge for employers in every sector. According to the forecast, the expectation is for 124,000 net new units to be permitted in 2022 and for permits to grow to 143,000 in 2024. “Still,” the report cautions, “this low level of home building means that over the next three years the prospect that the private sector will build out of the housing-affordability problem is nil.”