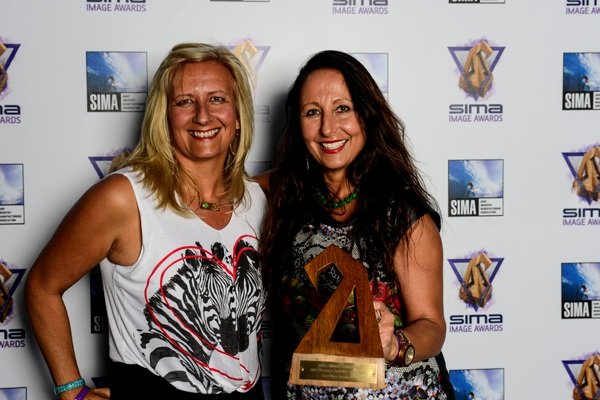 Twin sisters Coco and Izzy Tihanyi have been running a surf school for almost two decades and their Surf Diva boutique won for “Women’s Retailer of the Year.” (Photo by Brent Hilleman)

At any awards show, there are the surefire favorites to win and the long shots. In an industry dominated by a handful of behemoths, the latest Surf Industry Manufacturers Association (SIMA) Image Awards,held on Feb. 13 at The City National Grove of Anaheim in Anaheim, Calif., proved there was some hope for the underdogs.

Huntington Surf & Sport won for Men’s Retailer of the Year for 2013. (Photo by Brent Hilleman)

Environmental leader Patagonia scored the “Environmental Product of the Year” award for its “R2” Yulex wetsuit made out of plant-based materials. (Photo by Brent Hilleman)

RVCA once again won the “Men’s Apparel Brand of the Year” award, a title it has held since 2010. (Photo by Brent Hilleman)

Awards were given for outstanding apparel, accessories, footwear marketing campaigns and hardgoods for 2013. Between awards, co-hosts and action-sports personalities Nicole Dabeau and Chris Cote bantered inside jokes about the surf industry for an audience of more than 700 insiders.

The last award and always a highlight of the night, “Breakout Brand of the Year,” was awarded to Captain Fin, a grassroots brand from Oceanside, Calif. Captain Fin has evolved from surfboard fins designed in collaboration with against-the-grain surfers and artists to now producing a growing clothing collection.

The young brand Roark Revival was a surprise winner for “Men’s Marketing Campaign of the Year” and beat out deeper-pocketed companies Vans, Billabong, Hurley and RVCA. The founder of Roark Revival, Ryan Hitzel, joked on stage alongside his team of three: “I don’t know how we just won this. This is, like, our whole company right here.”

Roxy was back on top for the “Women’s Apparel Brand of the Year” on the heels of a growing Roxy Fitness division and buzzed-about special collaborations such as its “DVF Loves Roxy” collaboration with Diane von Furstenberg. In the case of Rip Curl, it had team rider Alana Blanchard’s famous bum and her thousands of social-media fans to thank for their win of “Women’s Marketing Campaign of the Year.”

Twin sisters Coco and Izzy Tihanyi have been running a surf school for almost two decades, and their Surf Diva boutique, outfitting those surf Betties in stylish threads and gear, won for “Women’s Retailer of the Year.”