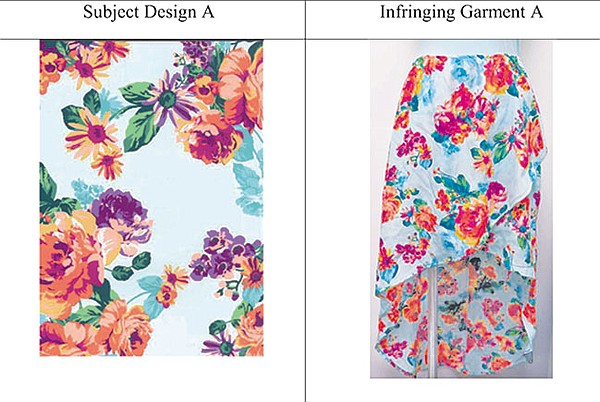 SIDE BY SIDE: Novelty Textile said its fabric design on the left was illegally copied and used in the skirt on the right, which was sold at The Wet Seal.

More than one year after filing a copyright-infringement lawsuit over three different fabric designs, Novelty Textile has been awarded $650,000 in a jury verdict.

The verdict is one of the largest monetary awards this year for a fashion copyright-infringement lawsuit in Los Angeles, said Scott Burroughs, one of the attorneys representing Novelty Textile.

The case, filed in U.S. District Court in Los Angeles on July 31, 2013, centered around three proprietary fabric designs that Novelty Textile said it had developed and then were ordered by one of the defendants, Hot Shot HK, doing business as Brat Star Inc. in New York.

Novelty Textile, based in Vernon, Calif., and owned by James Son, claimed that Hot Shot HK placed purchase orders for the fabrics and later canceled them only to have the fabric copied in China. The fabric designs were made into clothes sold to The Wet Seal, another defendant in the case, which continued selling the garments to shoppers even though the Southern California retail chain received a cease-and-desist letter, Burroughs said.

“The facts here were egregious,” Burroughs said. “Hotshot had actually issued a purchase order to Novelty Textile for the three designs and canceled them a day later and then had the fabric knocked off in China.”

One of the fabrics had a yellow daisy design on a black background; another had a floral design in mint, orange and green; and a third fabric had a geometric design in blue, pink and teal.

The fabrics were copyrighted in 2012 before they were shown to Hot Shot HK, court papers showed.

Side-by-side photos of Novelty Textile’s designs and the designs used in apparel sold at The Wet Seal appeared to be identical.

In a summary judgment by U.S. District Court Judge S. James Otero, both defendants were found guilty of willful copyright infringement under the Copyright Act of 1976. A jury then decided punitive damages. Motions are forthcoming for costs and attorneys’ fees.

This is not the first time Novelty Textile has sued a retailer and an apparel maker for copyright infringement. Novelty has been a plaintiff in at least 14 cases against retailers such as Nordstrom, Windsor Fashions, Charlotte Russe, Love Culture, Ross Stores and Rue21 Inc.

But it is rare for these kinds of cases to actually go to court. Most are settled outside a courtroom to avoid an expensive trial, where attorneys’ fees can mount to more than $150,000 to $200,000.

Exist denied all the allegations, saying the vendor of the garments had obtained the designs in a transaction taking place in a hotel lobby in China.

But in a U.S. District Court trial in Riverside, Calif., Exist was found guilty of willful copyright infringement and a jury awarded $1.75 million to Avid Ink. Avid Ink was presented by Doniger/Burroughs, the same law firm that represented Novelty Textile.

On the legal trail

In the past decade, many Los Angeles fabric converters and printers have had more than their day in court. Some have filed scores of lawsuits, with several fabric companies being accused of making more money filing lawsuits than creating fabric designs.

L.A. Printex Industries in Los Angeles has filed hundreds of lawsuits over fabric design and copyright infringement. Between 2005 and 2009 alone, the Los Angeles company, headed by Jae Soon Nah, filed more than 200 federal lawsuits. And more have been filed since then.

L.A. Printex has sued retailers such as Macy’s, Mervyns, TJ Maxx and Forever 21 as well as clothing manufacturers such as Ms. Bubbles, Stony Apparel Corp., Just for WrapsandTopson Downs of California.

Jeff Kobulnick, an attorney with Ezra Brutzkus Gubner who has represented various parties in these kinds of cases, said at least 300 lawsuits are filed a year involving fabric design copyright infringement. Most of those are in Los Angeles with others in New York and Canada.

“Oftentimes the plaintiffs in these cases have raced to the copyright office to file for copyright registration on designs that have been in existence for a long time, such as animal prints or a fleur-de-lis,” he said. “The plaintiff pays a copyright fee and then feels they have a ticket to sue whoever is using a design that may be similar.”

Mark Brutzkus, also with Ezra Brutzkus Gubner, advises his retail and fashion clients to have warranties and agreements in place with their fabric vendors and clothing manufacturers guaranteeing that they own the copyright to the fabric’s design. “We have been advising our manufacturing clients to have indemnity agreements with their fabric suppliers and with representation and warranties from the fabric supplier that they own the copyright to the fabric designs or have a license to sell the designs,” he said.

Attorney Staci Riordan, who chairs the fashion-law team at Nixon Peabody in Los Angeles, said it is hard to check which print designs have been copyrighted at the U.S. Copyright Office because they are only listed by number or name and have no accompanying photos or drawings. “The system that is in place is extremely problematic,” she said. “You are rolling the dice every single time.”