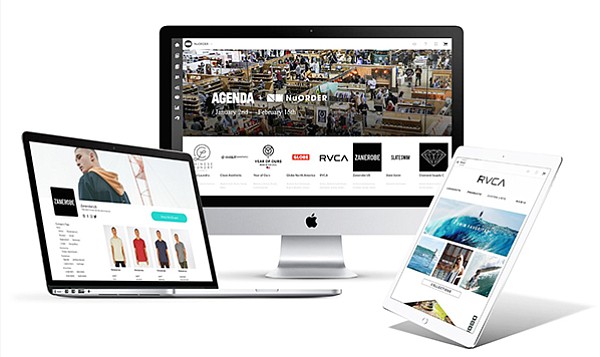 The 15-year-old event and NuOrder, a Los Angeles–headquartered business-to-business e-commerce platform, announced they would introduce a digital extension of Agenda at the upcoming Jan. 4–5 show in Long Beach, Calif., and at the Feb. 12–14 run of Agenda in Las Vegas.

Agenda’s digital marketplace will become a crucial part of the Agenda experience, said Aaron Levant, Agenda’s founder. As digital commerce becomes more central to all businesses, it is crucial for trade shows to do more than produce a website. “In the long run, if we don’t do it we’ll be irrelevant,” Levant said of the traditional trade-show business model.

But the physical Agenda, which runs twice-a-year shows in Long Beach and Las Vegas, will continue to be healthy, said Heath Wells, NuOrder’s cofounder and chief executive officer. “We can’t replicate Agenda. People need to touch and to feel product. They need to shake hands. We extend that to the other 360 or so days a year,” he said.

“Retailers going to trade shows only have two to three days to conduct business. They can run out of time and not see 20 other brands. Retailers can map out a show better,” Wells added, noting he hopes the digital marketplace will complement the physical trade show.

The digital marketplace, which does not have a separate name from Agenda, will start with 50 brand sponsors and 500 VIP retailers. All retailers will be welcome in the market, Wells said.

At the digital Agenda marketplace, brands can upload catalogs and line sheets to NuOrder’s platform to work with retailers at the physical show and then after the show. Retailers can browse brands through social media–style profiles that will contain credit applications as well as feeds from Instagram profiles run by brands.

Agenda’s launch of an online trade show comes after trade-show vendors have been complaining for some time now about declining buyer attendance throughout the market. Jason Bates, a former trade-show producer and founder of the Derelicte Showroom at the California Market Center, said Agenda’s new venture should find an interested market.

“There’s a huge amount of cost savings not having to get trade-show booths and not having to travel,” Bates said. He said the idea of a digital trade show was pitched to him when he was producing Class, a trade show that took place in 2011 in Santa Monica, Calif. While there was interest in the ideas and news stories covered the idea of a virtual trade show, the concept didn’t take off. But times have changed, Bates said.

“I don’t know if brands were technologically up to speed and if the technology was there, but now there may be more of an appetite,” he said.

UBM, which produces the sprawling MAGIC trade shows in Las Vegas, has been running the virtual trade-show site shopthefloor.com, which has been in existence since 2013. Mike Alic, managing director of UBM Fashion, said more than 3,000 brands run profiles at the e-market.

In 2018, ShopTheFloorPremium will debut. It will offer new features such as SalesMatch, which helps brands find retailers who would be open to their products based on each business’s criteria. Other new features: Lead Insights, which allows brands to see and request connections with retailers who view their digital showrooms, and Leads365, a smartphone app that allows vendors to scan trade-show badges and business cards and import the info to their ShopThe Floor account.

NuOrder’s digital marketplace for Agenda has been going through a test phase since November. One brand in the test phase got 15 leads from retailers during November, Wells said.

The digital marketplace will be an integral part of the Agenda experience, Levant said. It will not feel separate from the physical trade show. “There’s a lot of talk about experiential retail. We’ve done a lot to make Agenda more experiential, less transactional,” Levant said. “It is as important to be digitally focused as well as experientially focused. This is a great way to do it.”