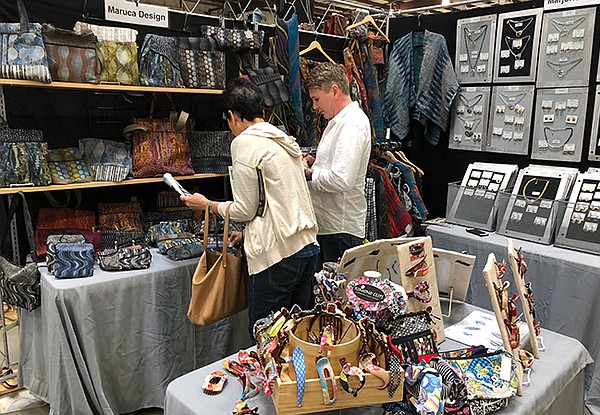 European Brands Are the Main Focus at FMNC

Even though the Fashion Market Northern California show was right after the big shows in Las Vegas, the three-day event in San Mateo, Calif., was a time to focus on European lines.

The Aug. 19–21 show was scheduled just before the September deadlines to place orders with European manufacturers.

“It’s a strong market for European lines,” said Mary Minser, who owns the Mary Minser Sales showroom at The New Mart in Los Angeles. “If you have European collections that break now, the buyers are trained to buy it now. It might be sold out by October,” she said.

Minser said that many European lines do not produce a strong market for Immediates orders, which have been increasingly popular in the United States for the past few years. At FMNC, Minser exhibited the European-designed line California Dress Company.

Along with European business, FMNC provided an alternate market for retailers who did not want to shop at the sprawling Las Vegas trade shows, which ran Aug. 11–16, said Mary Taft, the executive director of FMNC. 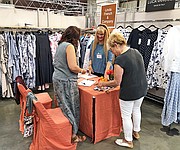 Jacqueline Stone, the Northern California sales rep for Canadian fashion line Sympli, said despite the small size, there is serious demand for the show. “Following right after Vegas makes it more challenging. However, there is a loyal clientele. Buyers like this show. Many of them don’t go to Vegas. I’m pleased with the quality of exhibitors and buyers who go to this show,” she said.

However, FMNC’s August event is the smallest of the five annual shows at the San Mateo County Event Center. Taft said the number of vendors and attendees was basically even with FMNC’s August 2017 show—with about 120 vendors exhibiting at the show.

FMNC is a sales representative–run, regional trade show that focuses on independent boutiques from the San Francisco Bay area to the Oregon border. However, boutique owners from the Pacific Northwest and the West come to shop for categories such as women’s apparel, footwear and accessories.

Ute Wegmann of Ute and Jim’s Accessories said FMNC’s buyers were serious about placing orders. “The show is lovely and casual. The pace is the complete opposite of what we experience at MAGIC,” Wegmann said.

Lynne Andresevic of the Crayola Sisters showroom said exhibiting at FMNC after working the Las Vegas shows can be exhausting.

After working the busy Las Vegas trade shows, Andresevic packed her six rolling racks into a van and drove 10 hours to San Mateo, setting up shop at the event. It was tiring but rewarding.

“I opened up four new stores,” she said. She introduced footwear and accessories brand Agave Sky at the show.

This summer, Northern California has been hit by devastating brushfires, which have gobbled up 400,000 acres of land in Mendocino, Lake and Calusa counties.

Vendors and show management had not confirmed yet if the fires had caused a drop in buyer attendance, but a series of fires last year in Northern California’s wine country and Santa Rosa, Calif., caused buyer attendance to decline during the October 2017 run of FMNC.

At the most recent show, a possible drop in attendance was compensated for by boutiques from other parts of California, Wegmann said.

Vendors making a debut at the show included Canadian brand Dex, which describes itself as a producer of affordable luxury clothes for women. Italian brand Tricot Chic also made its FMNC debut.