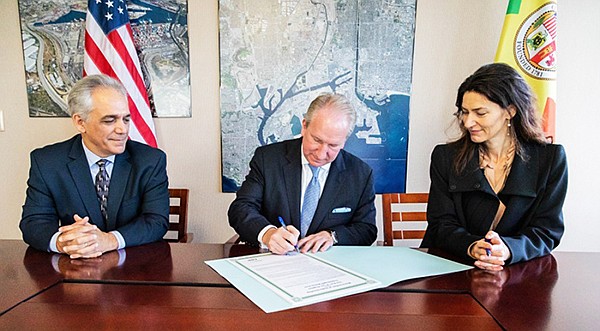 Port of L.A. Working with Danish Port to Strengthen Sustainability

The Port of Los Angeles, ranked as the No. 1 container port in the United States, announced that it has entered into a five-year memorandum of understanding with the Copenhagen Malmö Port AB, which manages ports in Denmark and Sweden, to collaborate on sustainability and environmental issues.

There was a signing ceremony on Nov. 15 at the Port of Los Angeles in the metropolis’s San Pedro section. The two ports will exchange information on improving industry practices on energy use; sourcing alternative energy; advancing clean marine-terminal equipment technology, ocean-going vessels and drayage trucks; as well as involvement in global environmental initiatives.

“This agreement further solidifies our partnership with [Copenhagen Malmö Port] and our mutual interest in promoting the most efficient, most sustainable goods movement possible,” Gene Seroka, executive director of the Port of Los Angeles, said. “With cooperative information sharing among ports around the world, the Port of Los Angeles has been able to achieve many of our advancements in reducing environmental impacts from port operations over the last decade.”

“In order to accelerate solutions on sustainable matters, we need to push for new technologies and new ways of working,” she said. “Strong partnerships are key to solid and speedy development, and we hope this agreement will also accelerate cooperation between the green maritime development in our two regions for mutual benefit.”

The Port of Los Angeles has made commitments to sustainability with several projects including installing new solar energy initiatives, scheduled to come online by the end of 2019. It also says that it has reduced its water usage by 20 percent by installing smart-water meters and retrofitting irrigation systems and restroom fixtures as well as reducing times to water green space on port grounds to two times per week.

The port also set goals to improve air quality by reducing emissions. The plan includes the Clean Truck Program, a vessel pollution reduction program and working with new technology such as what is reported to be the world’s first hybrid tugboat. A 2017 statement from the port also set out goals for the port to reduced greenhouse gases by 40 percent below 1990 levels by 2030 and 80 percent below 1990 levels by 2050.