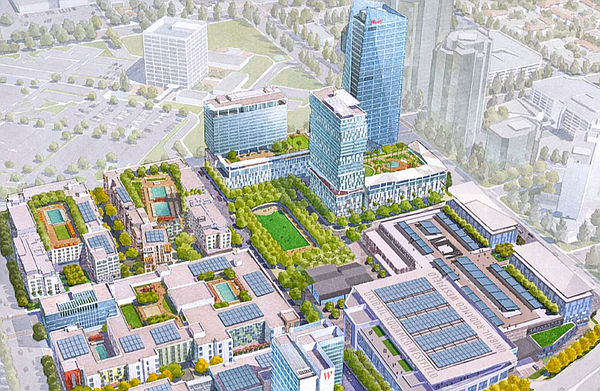 Plans for Promenade 2035 encompass retail, entertainment and sports complexes, hotels, and residential units on its 34 acres. | Photo courtesy of Promenade 2035

A unanimous Los Angeles City Council vote recently gave a green light for final plans of Promenade 2035, a more-than-$1-billion mixed-use project that is scheduled to be constructed on the site of the now-shuttered Promenade retail center in Los Angeles’ Woodland Hills neighborhood. The property is owned by Unibail-Rodamco-Westfield and is adjacent to the Westfield Topanga & The Village retail centers, which offer 2.1 million square feet of retail, including a Nordstrom, high-end shops such as Louis Vuitton and specialty shops such as Vans.

Construction on Promenade 2035 is scheduled to begin within two years, according to media reports. The plans for Promenade 2035 focus on developing the 34-acre property into a downtown district for the West Valley region of Los Angeles’ San Fernando Valley. According to Bob Blumenfield, the L.A. city councilman who represents Woodland Hills, Promenade 2035 would be a “game-changing development for the West Valley.” (The name invokes the Warner Center 2035 Specific Plan that was adopted by the city council in 2013, not the expected date of completion.)

The development will be anchored by a community grocery store and pharmacy that will complement retail in the neighboring malls and focus on “smaller, more localized retail opportunities,” according to promenade2035.com website.

The development will strive for sustainability by achieving LEED Silver status for its buildings and irrigation plans that will rely on capturing and reusing rainwater.