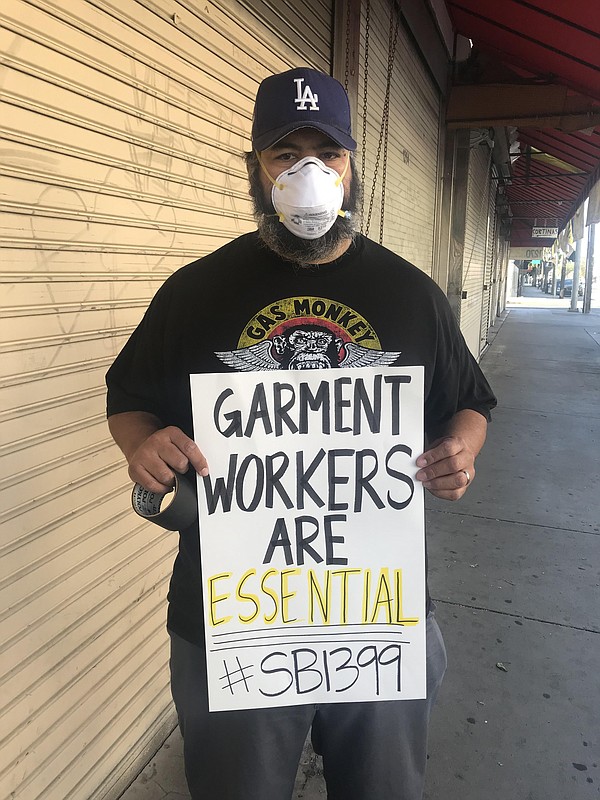 Garment Worker Center protest on May 14

A standard for how the garment industry pays sewers may be outlawed in California. SB 1399, the Garment Worker Protection Act, was passed by the California Senate in a 25–11 vote on June 25. The bill seeks to guarantee a minimum wage for garment workers and end the industry standard of the piece-rate system by which workers are paid by how many garments they produce during a shift. The bill is still in the legislative process but is scheduled to be submitted to the State Assembly on July 29 by the bill’s coauthor, Lorena Gonzalez, a Democrat who represents the 80th Assembly District, which covers southern San Diego. Gonzalez is the chair of the Latino Legislative Caucus and helped raise the state minimum wage in California.

The bill was introduced to the State Senate by Sen. María Elena Durazo. She represents the 24th district, which represents East Los Angeles, parts of downtown Los Angeles and neighborhoods surrounding downtown. Durazo said that SB 1399 addresses longstanding grievances by garment workers against the piece-rate system, which has been used in garment manufacturing for decades.

“I am grateful to my Senate colleagues for approving the Garment Worker Protection Act of 2020,” Durazo said. “It is time that we demand better working conditions for women and just hourly pay for garment workers who, when paid by the piece, earn on average $5.15 per hour.”

The bill also closes what Durazo has criticized as a legal loophole. Retailers and companies who order apparel made in California factories will be responsible for the wages of people employed by contractors who produced the goods. During past wage disputes, retailers have argued that contractors are solely responsible for wages for items sold at retailers’ stores. Labor advocates criticized the argument as allowing retailers to duck responsibility for paying garment workers’ wages.

Apparel-industry and business groups were strongly opposed to the bill. The trade group California Fashion Association and the California Chamber of Commerce called SB 1399 a job killer. Ilse Metchek, CFA’s president, said that the bill would crush opportunities for good sewers to make more money.

“It means that good sewers won’t get a bonus. What they have done is taken money away from the best of them. They have penalized the expert sewers,” she said.

In an already struggling domestic apparel industry, Metchek feels that the bill will impede recovery.

“What they’ve done is penalize the legitimate shops,” she said. “It will drive more businesses underground.”

The California Chamber of Commerce has issued statements urging legislators to vote against SB 1399. The chamber believes that the bill will not only increase costs and bureaucratic burdens on California’s garment-manufacturing industry but will also duplicate law that is already on the books.

“Eliminating this form of payment is unnecessary,” Jennifer Barrera, executive vice president of the CalChamber policy staff and executive team, said in a June 4 statement. She contended that California law already requires workers to be compensated at no less than minimum wage, she said. Even if workers are being evaluated on a piece-rate system, law requires that they be compensated at a minimum wage. Barrera also stated that the bill would force unreasonable standards onto nonunion employers and would punish companies that are not union.

Some manufacturers already pay their sewers minimum wage. Rodolfo Ramirez is co-owner of Top Hand Manufacturing, located near downtown Los Angeles. It had been paying the shop’s 12 sewers minimum wage since Ramirez and his business partner, Andrew Cheung, acquired the factory from the previous owner in 2019.

Ramirez and Cheung also started the brand Pocket Square Clothing. Both of their mothers worked as sewers in Los Angeles’ garment industry.

“I see a lot of sewers as my family. It’s only fair to pay them fair wages,” Ramirez said. “There’s a human element in how clothes are made. It’s always been our philosophy for a brand and now as a manufacturer to have mutual reciprocity. As we grow, we want you to grow as well in pay and benefits.”

Since Top Hand Manufacturing has been enjoying an uptick in business this year because it manufactures personal protective equipment, the company has been able to be generous. Ramirez said that a business owner’s skill can be judged on how the entrepreneur can find ways to continue to reward workers and safeguard their pay, even during tough times.

Marissa Nuncio, director of the downtown Los Angeles–based Garment Worker Center, a cosponsor of SB 1399, said that the bill would ensure that every company follow employment laws of paying the minimum wage. She feels too many companies take advantage of not paying sewers sufficient amounts.

“The piece-rate system in the garment industry is strongly associated with the high level of wage-theft violations,” Nuncio said.

Nuncio maintained that increased enforcement is required in a market where too many workers are not being paid according to what is legally required. In 2019, the state provided $16.3 million to the Garment Restitution Fund, which was created by AB 633, a 1999 law passed so California garment workers are guaranteed fair wages.

In 2021, the minimum wage is scheduled to increase to $15 an hour in California. The higher wages are going to force factory management to cut jobs for workers whose productivity is lagging, said Randy Youngblood, president of Apparel Resources, a Yorba Linda, Calif.–headquartered consultancy that advocates for contractors to labor commissioners.

“You’re going to lose workers on margins,” Youngblood said. “The powers that be who have been agitating for minimum wage didn’t have that in mind at all.”

However, he forecasted that a need for domestic-apparel production will continue.

“I’m convinced that sewing trades will survive domestically because the manufacturers are so close to market,” he said. “Everyone is trying to compress the time from manufacturer’s design to the cash register.”