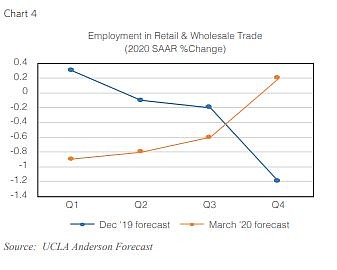 Economists at the prominent UCLA Anderson School of Business revised their bullish forecast on the California and U.S. economies on March 12.

Slowdowns in supply chains and coronavirus quarantines have disrupted the economy. The forecast predicted that gross domestic product would take some hits in the next two quarters, wrote David Shulman, the forecast’s senior economist.

“We view the COVID-19 epidemic, and likely pandemic, to work as both a supply shock and a demand shock on the economy,” Shulman wrote. “As a result, we are assuming a two-quarter hit to real GDP growth in the second and third quarters of this year, with very modest increases of 1.3 percent and 0.6 percent, respectively, compared to the 2 percent–plus growth we previously forecasted.”

Jerry Nickelsburg, director of the UCLA Anderson forecast, wrote that current data did not indicate that a recession was on the horizon. However, businesses and markets that were already experiencing difficulty would probably experience turbulence.

Nickelsburg said that the retail and wholesale trade sectors exhibited a decline in growth in UCLA’s December forecast, which was bullish about the economy. In the forecast released on March 12, Nickelsburg predicted a rally in the 2020 fourth quarter. “In the current forecast, the sector contracts much more rapidly and then rebounds in the fourth quarter,” Nickelsburg wrote. “The rebound is simply the recovery of retail and wholesale trade as supply chains return to normal and Walmart shoppers become shoppers once again.”

He also wrote that the overall economic impact of the coronavirus depends on how long the pandemic lasts and how widely it spreads.