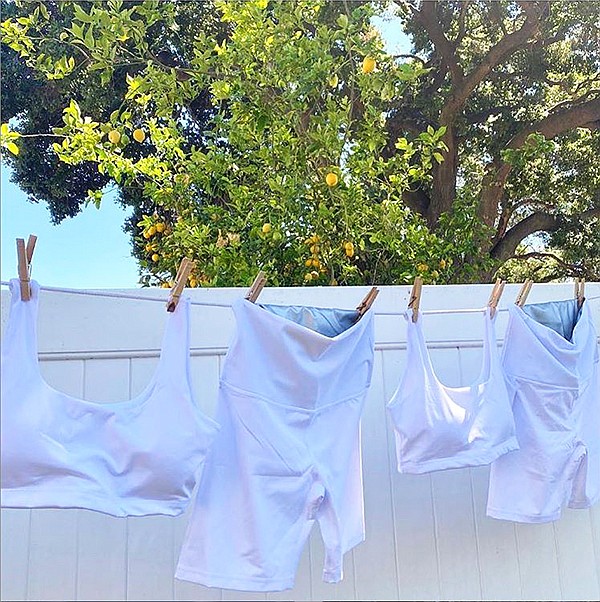 Em:body Works With the Human Body to Achieve Fitness Goals

As the saying goes, “No pain, no gain,” but for Emma Vollrath, a personal trainer and founder of the San Jose, Calif., activewear brand Em:body, the mantra would be “No sweat, no results.” Starting her own fitness journey in 2013, first in weightlifting, eventually gravitating toward Pilates and barre, Vollrath launched Em:body in 2019 after a year of working as a personal trainer who noticed a common concern among her clients when she would inquire about their goals.

“Almost every single one of them either said something about their lower stomach, bloating or water weight, or it was about looking good naked,” Vollarth said. “There are waist trainers and waist belts, but they tried them and didn’t like the way they looked or they just felt too bulky.”

After considering the needs of her clients, Vollarth wanted to not only keep them fit through remaining active but also wanted to create beautiful apparel that works with the body’s own science to enhance the results from fitness activities. Seeking to create activewear that will warm the body and trap heat, Vollarth knew that this type of apparel would increase sweat, thereby helping to expel water weight and reduce bloating.

“Make something that makes you look good and holds you in but also helps you get to that end goal of looking good naked and getting rid of water weight and bloating, so that is what I had in mind when I started Em:body,” she said. “I just wanted something that could benefit and reward you while you’re working out.”

For her first collection, Vollarth created sculpt-and-sweat yoga pants that included 3.5-millimeter neoprene on the inside, the same heat-conserving material used to create wet suits designed for scuba divers and surfers. While the material retains heat, it also increases sweat and eliminates water weight.

“The neoprene raises your body temperature and holds you in because it’s not super stretchy so it sticks to your stomach very well. I love the idea of it being hidden, not super bulky. It would hold your waist in, and that was what my thought process was for the first one,” she said. “It is phenomenal getting rid of water weight and bloating because you just sweat out everything.”

Following the release of Em:body’s first collection, Vollarth sought to improve upon the product that she created by offering a bit more stretch, which is not a characteristic of neoprene. Released in June, Em:body’s next collection, named Toby, was created using polyvinyl chloride, a popular material used in creating sauna workout clothing, which creates the heat-retaining effect sought by Vollarth, but those pieces are often made in silhouettes that are baggy.

“With the neoprene, you have to take it off because it can irritate your skin if you wear it too long when you’re sweaty,” she said. “PVC doesn’t do that at all. It’s super thin, still holds you in, and it’s not noticeable either, which was my main goal as well. It doesn’t make you look bulky.”

Moving forward, Em:body will create its pieces using PVC as it affords the ideal result that mirrors Vollarth’s vision of a sleek piece that works with the body to lose bulk. Offering results similar to a sweat belt, which can appear bulky, Em:body streamlines the body’s shape, looking chic while also working hard.

“It’s something that didn’t look like a waist trainer but worked as a waist trainer, so I wanted it to resemble normal activewear with a twist,” Vollarth said. “On the outside it looks normal, but on the inside it’s like, ‘What is this, I’ve never seen this before in [workout] pants?’”

Additional changes for the brand include moving production from Shanghai to New York City with fabric sourced in Los Angeles. Having production established domestically is another step in the evolution of Em:body that Vollarth welcomes as she hopes to remain more hands-on with closer access to the supply chain.

As an active brand that aims to appear more fashionable while working hard to shape the body, the brand will introduce a Fall 2020 collection using its PVC inside with comfortable navy-blue velvet on the outside. Spring 2021, Em:body will offer styles that rely on a tennis theme with pastels in light pink, baby blue and a lime green or pale yellow, but the decision on the final color will be left up to an Instagram vote by fans of the brand. Available at embodyactivewear.com, Em:body’s Toby line is sold in sizes S–XL with other styles offered in S–XXL and priced at $35–$95 retail.