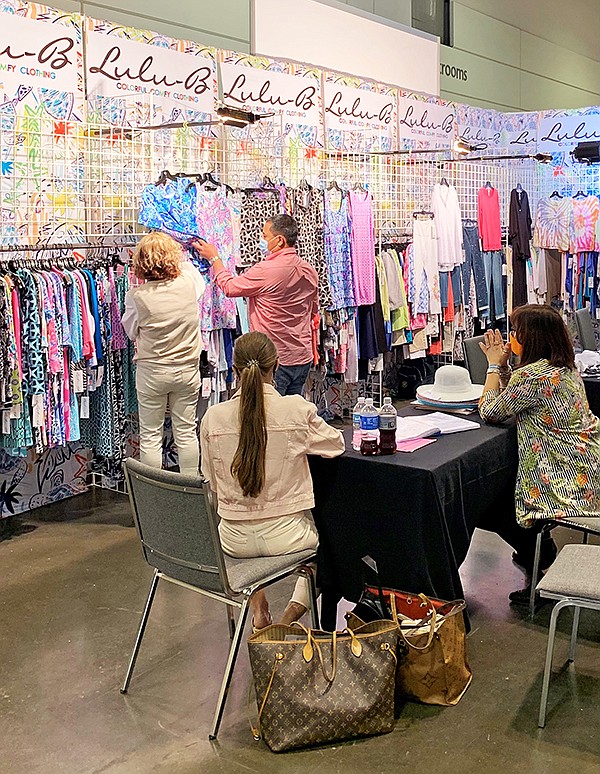 At the WWIN show, many retailers were betting on a return to colors and “dressing up” post-pandemic. | Photo courtesy of WWIN

WWIN Travels Across the U.S. to Bring the Industry Together in Person

As the apparel industry emerges from a 2020 that saw on-site trade events halted, the Womenswear In Nevada event moved from its home in Las Vegas to present its WWIN Orlando Showcase Feb. 9–11 at the Orange County Convention Center in Orlando, Fla.

Representing Atascadero, Calif.’s Vine Street Apparel, owner Kristi Reeves met with buyers from the Midwest and Florida as she fielded orders for trends including faux fur from her made-in-the-U.S.A. brand. Reeves was confident in the measures taken by WWIN producers to ensure safety and bring major show brands to a focused space.

“We all got COVID-19 testing. It was good. I had new accounts. It was more a regional show as far as attendance. The venue was great,” Reeves said. “I liked that the WWIN show and MAGIC were all together. I think the customers get frustrated when they have to go here, there and everywhere when they’re in Vegas.”

In addition to welcoming the opportunity to see Vine Street Apparel, Heidi Shubin, who owns Sugardaddy’s Boutique in Bakersfield, Calif., saw many of her beloved brands in Orlando as she continued the work of her mother, who owned the shop for 39 years. With customers ages 35–90, Shubin was already receiving her orders. During the event, Shubin visited with Moonlight by Y&S Fashions, Tia, Aratta, Helen’s Heart, Lost & Found Jewelry, GG Moda and, her favorite for style and fit, Samuel Dong, as she maintained optimism for less-casual dressing in the near future.

“Nice, flowy, casual but classy. Something you can wear and dress it up when things open up again,” Shubin said. “Do not bypass that special outfit, do not walk by and pass it up because you might think that your customers don’t have a place to wear it today. Get out of the box and do it. They will wear it.”

This optimism that a less-casual apparel atmosphere is near was shared by Eli Pirian of Baciano, which is based in Los Angeles. As buyers searched for Fall, Pirian saw a demand for color.

“People are looking for loungewear, but soon enough that will wear off and customers will search for newness and going back to old color blocks, stripes and chevrons,” Pirian said. “At the end of the year, everyone will be okay as long as everyone holds down the fort until this all goes away, as business goes back to somewhat normal.”